A Saint for people whose sexual partner won't marry them 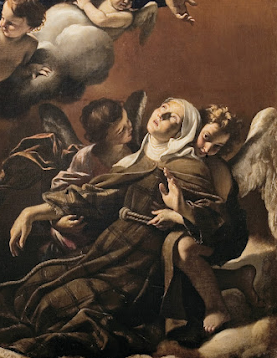 I confess that before learning about her life, I thought St Margaret of Cortona had nothing to say to modern men and women about, ahem, sex and marriage. I knew she'd been so saintly that the souls in Purgatory had sought out her help, but I assumed she had always been so pure that she never had anything like a problematic sexual liaison in common with people today. Wow, was I wrong.

Another reason I thought she would never have been in a sexual relationship with a man who didn't want to marry her was because she lived in the 13th century, and I have this notion that such unseemly things like using someone for sex didn't happen back in the years 1247 - 1297 when Margaret lived.

Her early life was like something from a Brothers Grimm fairytale. Her early years were happy but her mother died when she was only 7. Soon after, her father took a new wife. Margaret's stepmother was cold to her and made the little girl's life uncomfortable. Margaret's father seemed like quite a weak man, and did not prevent his new wife from ill-treating his daughter. It all got too much for Margaret who was looking to escape and looking for love.

Margaret's family were not high in the social pecking order and they certainly were not aristocracy. But she was very pretty and at 16 she attracted a young man. He was a nobleman who liked her for her looks and he asked her to elope with him to his estate in Montepulciano, Southern Tuscany. This rascally young fellow set Margaret up in his castle and for a decade she was his mistress. Margaret bore the nobleman one son.

He refused to marry her because unlike him, she was not a noble. It was not entirely his fault that he could not make an honest woman of her, it was not expected of him to marry a commoner, but he knew this when he took her as his concubine and knew he could never give her the rights of a wife. Instead he used her for her body. And she, too, used him for the home he gave her, certain material comforts and she had the lifestyle of a noble without actually being one.

Even though she had an unusually lavish life for someone who had been born into the lower classes, Margaret was never content with this arrangement and she felt the pain of offending God because she was sleeping with a man who was not her husband. To offset the pangs of her conscience she gave money to the poor. She did ask the nobleman to break rank with the conventions of his class and marry her. Essentially, she proposed to him - multiple times. He refused to marry her, however, and nothing would change his mind. She had the pain of always being held in contempt; as the woman who was not of good enough birth to marry the man whose bed she warmed.

When they were approaching their 10th anniversary of cohabitation, the nobleman had to leave for a time to sort out a property dispute. When he did not return, Margaret searched for him and found his dead, mutilated body in a nearby woods. Instantly, Margaret was smote with guilt. She had allowed a sordid situation, the sins of which were on her lover's soul when he died. She was the less guilty because she had wanted to marry him, but she had nonetheless continued their liaison and now that his blood drenched the forest floor, she was utterly contrite and took full responsibility for her part. First she apologized to everyone who had known her for the scandal she had caused by her relationship with the deceased nobleman. Scandal is a strange concept in our times, but it's as old as time, and Margaret lamented that her example of living in sin was one that could have led other women, her peers, into such painful arrangements where they are always sexual partners and never wives. Margaret owned her role in the relationship and humbled herself before everyone who had witnessed it.

At the time of his death, she was 26 and she made the bold decision to leave the castle and the life of comfort. She went on foot to the Franciscans of Cortona because they were famous for helping people who wanted to amend their lives. She was given shelter by two local women, surely a comedown from life in a stately mansion, but Margaret gladly accepted their charity. She petitioned the Franciscans to become a Third Order Franciscan, and after 3 years of preparation, she took her vows. Later, her son became a Franciscan priest.

For the last 24 years of her life, in reparation for her past, she did the harshest of penances and often stayed up all night in prayer. Her beauty which had enthralled the nobleman made her feel guilty and she felt that had she not been so ravishing that he may not have fallen for her. So, she wanted to take a razor to her face so as to disfigure the visage that had so captivated the nobleman, but her spiritual director forbade this dastardly plan of self-harm.

After her canonization, she became the patron saint of many disparate groups of people, from the homeless to reformed prostitutes. But I feel St Margaret speaks to many women today who think cohabitation/living together is the way to marriage. Many women I've known have thought of living with a man as an audition or marriage, only to find themselves rejected later on. I hold Margaret up as one who may intercede for women (and men) whose sexual partners do not want to marry them. And as one who can lead people by her example to taking full responsibility for their past sexual sins. Margaret repented of her role in the undoing of the nobleman. Too often, men and women only think of how they have been wronged in their sexual relationships and less about their own part.

After her conversion, Margaret was never bitter about her lot in life, as a single mother to a little boy whose father had died in less than savory circumstances and she never leveled blame at her dead lover, rather she became a renowned penitent whose story is more relevant today than ever.

St Margaret of Cortona's feast day falls on February 22nd. I wish you a very happy feast. I am posting early because I will be away from my desk for a few days to celebrate my birthday.