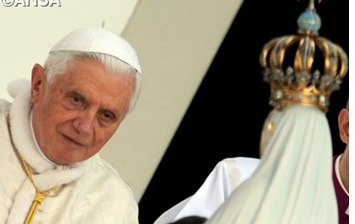 Pope Emeritus Benedict XVI will join with Francis and the bishops of the world in praying for the consecration of Russia and Ukraine on March 25.

He will do so privately, however, and will not be present at the consecration ceremony at St. Peter’s Basilica.

"Of course, Pope Emeritus Benedict XVI will join  Francis' call in prayer with regard to the consecration of Russia and Ukraine to the Immaculate Heart of Mary,” Gänswein wrote in an email to the news agency.

Francis agreed to conduct the consecration of the two countries in response to an urgent request from the Latin rite bishops of Ukraine. The Vatican has since confirmed a March 17 CNA report that the pope has asked all bishops of the world to join him in the consecration.

By intervening BXVI, Heaven will pour out its graces in a way that we do not know but certainly not to the extent intended.

And note that this consecration has been requested out of fear that war will proliferate, not for a spiritual purpose concerning the conversion/salvation of souls, the primary purpose of the Fatima apparitions.