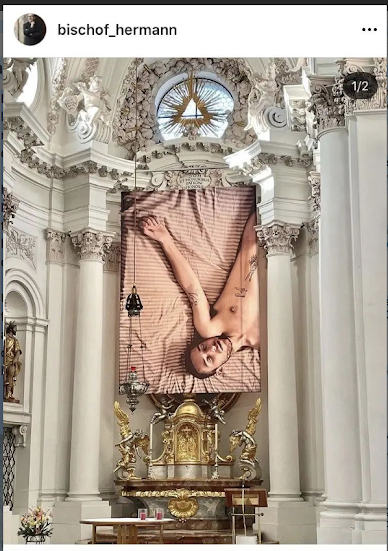 Innsbruck Bishop Hermann Glettler, Austria, installed "for Lent" a large-format photo of a naked man as altarpiece in the Innsbruck university church.

Under this link (CAUTION - very graphic content), the original scene photographed by the so called artist Carmen Brucic can be seen. On social media, the alleged protestor is identified as a simple homosexual.

It seems that progressivism is rapidly slipping into Satanism. One of the symptoms of this is the upside-down crucifix that the bishop of Innsbruck, Herman Glettler, ordered to be placed on a back wall of the Spitalkirche, Hospital Church, in that Austrian city.

Glettler gave his full approval to this "art" project by Manfred Erjautz. He stated: "The Cross is neither an arbitrary decoration nor a symbol of power. It should be reviewed and studied in depth. Manfred Erjautz, with his clock Jesus in the Church, causes not only new reflections of the Cross, but confronts us with serious questions about the essence of life.... As time passes, the arms form different constellations and the static body of the dead Christ suddenly comes to life, representing a moment of liberation from the cross and an overcoming of death itself".

This blah, blah, blah hardly disguises the satanic significance of placing Our Lord Jesus Christ at the back of the Church instead of at the front, upside down instead of head up and with his arms grotesquely separated from the body like a dismembered criminal.

In the row below, we show a blasphemous depiction of Our Lord made by the openly Satanist rock band Unholy Metal - Frostbitten. While the members of this band tried to offend Our Lord Jesus Christ in every way they could, it did not occur to them to separate the arms of Our Lord from His Sacred Body. It took a Bishop to propagate this macabre idea.

As of Ash Wednesday, "Your Personal Jesus" as the piece was called, can be seen in the Hospital Church in Innsbruck. This name is inspired by a rock song, also blasphemous, whose music video and lyrics describe the band members "finding Jesus" by engaging in fornication with prostitutes.

Herman Glettler was made a bishop by Pope Francis in 2017. 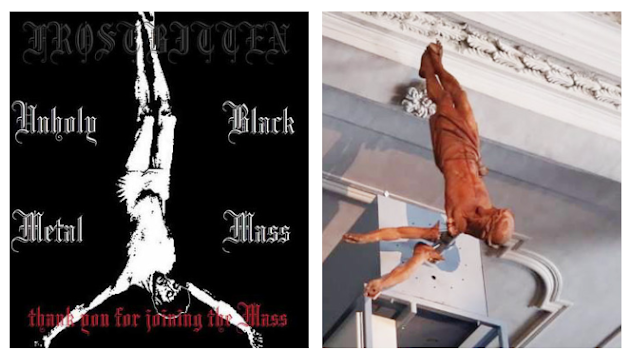