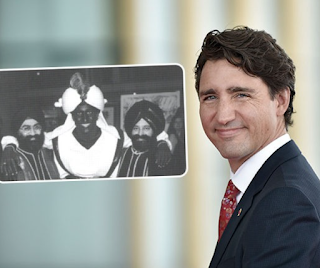 Legislation making its way through the Canadian Parliament would allow citizens to be taken to court and penalized if they are suspected of simply intending to post “hate speech” online.

The proposed law encourages Canadians to report other Canadians to the authorities for intent to post hate speech online, and allows courts to punish Canadian citizens for things they haven’t done yet.

A truck with banners is seen parked in front of Parliament of Canada as demonstrators continue to protest the vaccine mandates implemented by Prime Minister Justin Trudeau on February 10, 2022 in Ottawa, Canada. (Photo by Dave Chan / AFP via Getty Images)

The law was noticed by Substack VP Lulu Cheng Meservey, a citizen of Canada, who drew attention to the bill’s “alarming” aspects.

Under the proposed law, provincial courts may add penalties that they consider “desirable to secure the good conduct of the defendant,” including having the defendant wear an electronic monitoring device, confining them to their home or place of residence at set times, and prohibiting them from consuming alcohol.

If a Canadian citizen “fears on reasonable grounds that another person will commit” hate speech online, or “an offence motivated by bias, prejudice or hate based on race, national or ethnic origin, language, colour, religion, sex, age, mental or physical disability, sexual orientation, gender identity or expression, or any other similar factor,” they may lay the information before a Canadian court.

The bill defines online hate speech as “a discriminatory practice to communicate or cause to be communicated hate speech by means of the Internet or other means of telecommunication in a context in which the hate speech is likely to foment detestation or vilification of an individual or group of individuals on the basis of a prohibited ground of discrimination.”

The bill has not yet passed into law, but it has the backing of the Canadian government led by Justin Trudeau.

The past few weeks have seen draconian crackdowns by Trudeau’s government against his own citizens, as the Canadian “Freedom Convoy” brought the country to a standstill in a protest against coronavirus vaccine mandates and other restrictions.