Doconomy, a credit card to control CO2 and climate 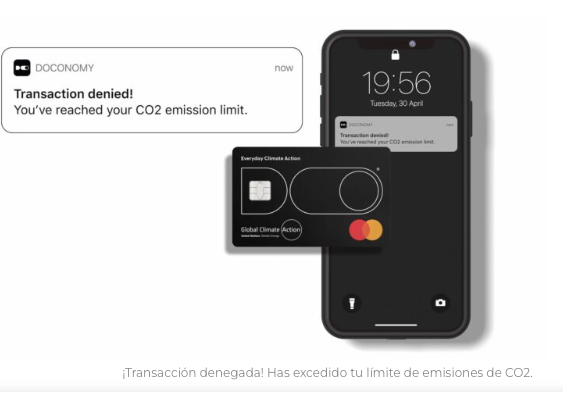 Doconomy is a credit card for CO2 control

Backed by the UN (United Nations), the WEF (World Economic Forum) and Mastercard, this card promises to track your carbon spending and disconnect you when you reach the maximum carbon allowance. Welcome to the impending green dystopia of Agenda 2030. As I mentioned in my previous article, a new study looks at the implementation of Agenda 2030 personal carbon allowances, the man-made climate change agenda continues to be rapidly pushed forward as the NWO (New World Order) controllers see how much mileage they can squeeze out of the COVID Cult craze. It is quite possible that at some point they will move from the COVID fake emergency to the fake climate emergency and try to convince the population to go along with equally strict rules in some sort of climate lock-in scenario.

Regardless of whether that happens or not, the goal of both operations is the same: segregation (punishing those who refuse to accept) and control. The long-term technocratic plan of Agenda 2030 is to introduce a social credit system in all Western nations, and then worldwide, based on carbon credits and modeled after China's authoritarian sesame credit system, which already blocks dissenters from full economic participation. Exactly the same thing, only on a smaller scale, was recently proposed by Victorian Premier Dan Andrews when he advocated a vaccinated economy.

Doconomy, the credit card to control CO2 and climate

Doconomy (abbreviated DO) is a Swedish registered company, but has the full backing and support of New World Order organizations such as the UN. The card is already available in Sweden. They are in a partnership with Mastercard, an entrenched Corporatocracy company. This is what the WEF (the same globalist organization whose head Klaus Schwab promotes the Internet of Bodies) writes in support of their CO2 monitoring credit card on the Doconomy.com website

"While many of us are aware that we need to reduce our carbon footprint, the advice to do so can seem nebulous and keeping track is difficult. DO monitors and cuts spending when we reach our carbon maximum."

The card carries the slogan "DO. Everyday Climate Action" and also has a piece of propaganda on the back that says "I take responsibility for every transaction I make to help protect the planet," which looks like sophomoric brainwashing. Note the all-seeing eye symbolism on the back of the card in the image above, taken from the UN SDGs (Sustainable Development Goals), specifically goal #13, which reads, "Take urgent action to combat climate change and its impacts."