Francis' Consecration: A Backdoor for Pachamama? 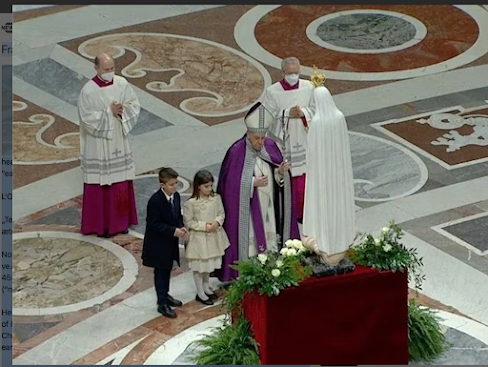 Francis’ March 25 act of Consecration calls Our Lady in Spanish “tierra del Cielo” which can be translated with "land/earth of Heaven" or "land/earth from heaven."

This weird title has caused considerable confusion among the translators who chose "Queen of Heaven" (English, Filipino), "you, earthly one in heaven (German), "heavenly earth" (Russian, Ukrainian), "earth from heaven" (Slovak), "earth of heaven" (Polish).

L'Osservatore Romano claimed the title was taken from some Byzantine-Slavic hymn.

„Terra cœlestis” is also a title used by St Peter Damini in the Marian hymn „O Genitrix æterni” (excerpt below).

Not always convincingly, Bishop Athanasius Schneider referred the title on OnePeterFive.com to Marian poems (“Mary is the heavenly garden,” “garden of Heaven”), Isaiah 45:8 (“Let the earth open, that salvation may sprout forth”), 2 Peter 3, Revelation 21 (“new earth”).

He finds references in Ephrem the Syrian and John Damascene who compare the earth of Eden that gave birth to Adam with the Virgin who gave birth to Christ, in St John Chrysostom (“You are the heavenly earth”), and in the Byzantine liturgy ("the untilled earth”, “virginal earth,” “paradisiac earth,” “Blessed earth").

However, Francis is not known for using the language of the Church Fathers whereas his pontificate is marked by an obsession with Pachamama. “Tierra del Cielo” denotes Chilean deities among them Pachamama.

Pachamama and Francis have engaged together several times, episodes at the Vatican aside, the last one being in December 2021:

Francis sent a letter to the designer of the Encounter Park in Santiago del Estero, Argentina, to congratulate him on this initiative, an ecumenical and interreligious theme park that promotes the world's major religions as equally valid ways of encountering the divine, among which Pachamama figured.