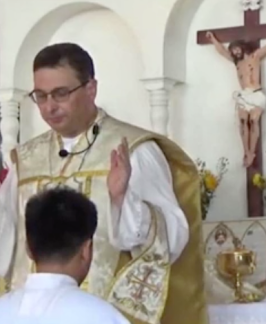 13 religious or diocesan priests have joined the Polish District of the Society of St. Pius X since 2019, Father Karl Stehlin, the local district superior, told Catholic Family News. German-born Stehlin was ordained a priest in 1988 and served in Gabon, Africa until 1994. He then began the Polish apostolate together with a second priest. After three decades, four priories with 32 Mass sites were established. After 20 years, Stehlin was sent to the Asian missions as superior for four years before returning to Poland.

A Dominican. One of the 13 priests who joined PiusX is Dominican Father Wojciech Gołaski. He has known Stehlin for several years. They engaged in some "friendly arguments". Gołaski has been a priest for 28 years, celebrated the Old Dominican Mass but was a critic of PiusX. On 16 July, just an hour after the publication of Traditionis custodes, Gołaski's superior knocked at his door saying, "Now the Old Mass is finished; according to the new document you must celebrate the new Mass." Gołaski replied, "I can't." The legalistic superior replied, "Then leave!" Gołaski obeyed. He called Stehlin and explained his situation. When they met, Gołaski knelt down in front of Stehlin asking for forgiveness for all the negative things he had said about PiusX. Stehlin was impressed by this humility and welcomed him.

No Free Bed. A priest who wants to work for PiusX must explain why he wants to leave his previous ecclesiastical structure. Stehlin is currently studying how these priests, including two Franciscans, a Redemptorist and a Pallotine, can preserve their identity. Some want to live a monastic life. After the arrival of the 13 priests, no free bed is left in the Polish priories. So, when Stehlin visits a priory, he stays in an inn or in private homes. Next August, the district will open a new priory. The PiusX school in Warsaw, where 280 children are taught, will also be enlarged.

Grabbing Communion. The priests are leaving not only because of Traditionis custodes but also because of – what Stehlin calls - the "theological nonsense" since Francis like Amoris laetitia, Amazon Synod, Pachamama, pan-ecumenism, Abu-Dhabi, Fratelli tutti, Corona restrictions. In 2020, for the first time in the history of Christian Poland, there were no Easter liturgies. People were told that attending the Good Friday liturgy would be a mortal sin against the Fifth Commandment. Also, grabbing Communion with the hand was imposed, although in Poland Communion was received almost exclusively. A Franciscan priest was summoned by his superior because he preached against grabbing communion. He was told to retract and threatened with suspension. The next day he joined PiusX.

Boom. In 2021, the number of faithful in Warsaw, the capital of the country, tripled. After Stehlin had started in Poland in 1994, for the first ten years, the Warsaw priory never counted more than 100 faithful. Summorum Pontificum made things easier. In 2012 there were about 300 faithful, in 2018 450 and at Christmas 2021 even 1,400. In 2021 Stehlin consecrated twelve new chapels: three in Slovakia and nine in Poland.