Francis Invited All Bishops To Join Consecration of Russia 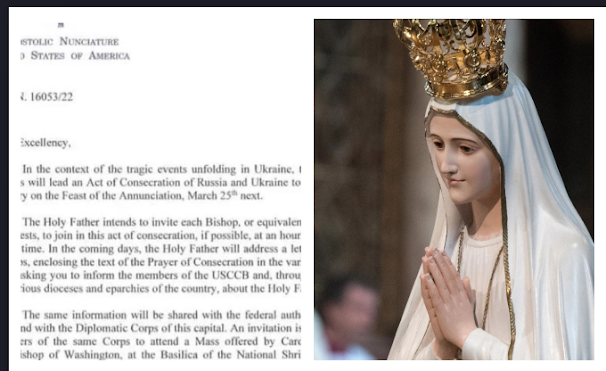 Francis invites “each bishop” to join the act of consecration of Russia and Ukraine to the Immaculate Heart on March 25.

This information is shared in a letter (March 17) of the US Nuncio, Archbishop Christoph Pierre, to the presiding US Archbishop José Gomez of Los Angeles.

Pierre announced that Francis will address a letter of invitation to all bishops, enclosing the text of the Prayer of Consecration in the various languages. The time of the consecration should correspond to 5PM Rome time.

Our Lady of Fatima requested this consecrations in 1917, explicitly saying that the act should be performed by the Pope together with the bishops of the world.