How Do Some Priests Say Mass? By Saint Alfonso M Liguori 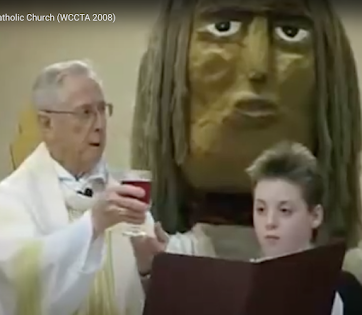 In celebrating Mass, reverence and devotion are necessary. It is well known that the use of the maniple was introduced for the convenience of wiping away tears because in ancient times priests, while celebrating, did nothing but weep out of devotion.It has already been said that the priest at the altar represents Jesus Christ.But, speaking of the way in which most priests say Mass, one should weep, but weep with tears of blood!It is a source of pity, so to speak, to see the disgrace that many priests and religious and even some of the reformed religious orders make of Jesus Christ.Observe with what attention priests ordinarily celebrate Mass. They would do well to be told what Clement Alexandrinus reproached the Gentile priests for, namely, that they made heaven the stage, and God the subject of the play.

But no, what am I saying? Comedy? These people would take much more care if they had to play a part in a comedy!

What attention do they pay to the Mass? Words are mutilated, genuflections that seem more like acts of contempt than reverence, blessings that one does not know what they are. They move around the altar and turn around in such a way that they almost make one laugh. They complicate words with ceremonies, anticipating them before the time prescribed by the rubrics.Everything happens because of the haste to finish the Mass soon. How do some priests say Mass? As if the church were about to collapse or the pirates were coming and there was no time to escape.A priest may have spent two hours babbling uselessly or dealing with worldly matters, and then where does he put all his haste? To say Mass.And in the same way these people begin the celebration, they proceed to consecrate and take Jesus Christ in their hands and communicate with such irreverence as if this were a piece of bread