Interfaith Marriages On The Rise 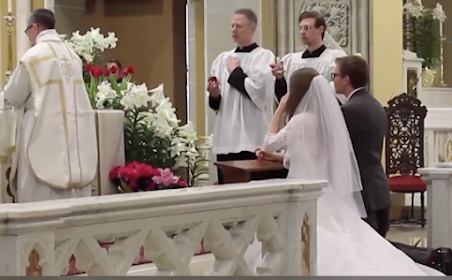 Secular and interfaith marriages are becoming more common in the United States. This from a recent analysis of a nationwide survey of over 5,000 adults, conducted from late November to mid-December.

Church Militant's William Mahoney has more on the numbers and what this means for Catholics.

According to the analysis, "Only 30% of Americans who were married within the past decade report having their ceremony in a church, house of worship or other religious location and officiated by a religious leader."

For Catholics, mixed marriages fall into two categories. If a Catholic marries a non-Catholic baptized person like an Episcopalian or Baptist, then the marriage is sacramental. If a Catholic marries a non-Catholic unbaptized person like a Hindu or Muslim, then the marriage is not sacramental.

Marriage is hard enough. It's difficult enough to be married to someone that, if you're not united in the core area of your life, it makes it even more difficult. And so, again, this is not a sin issue, but it is a wisdom issue. And because it's a wisdom issue, it means that moving forward in a relationship with someone who is not Catholic is going to mean you have to be wise.

A Catholic marrying a non-Catholic requires a special dispensation from the bishop. That dispensation is given provided the Catholic agrees to keep practicing the Faith and promises to raise the children Catholic. The dispensation further presumes the wedding will occur in a Catholic church.

Fr. Paul John Kalchik: "It remains to be seen how any of this in the long term will benefit society or the Church when the couples are excluding — from the very get-go — God in the relationship."

Venerable Fulton Sheen wrote, "It takes three to make love — not two — you, your spouse and God. Without God, people only succeed in bringing out the worst in one another. Lovers who have nothing else to do but love each other soon find there is nothing else." Sheen concluded, "Without a central loyalty, life is unfinished."

In 2015, a Pew Research Center survey showed a quarter of Catholic adults in America were divorced, and a third of those were remarried.