Jesus speaks about himself 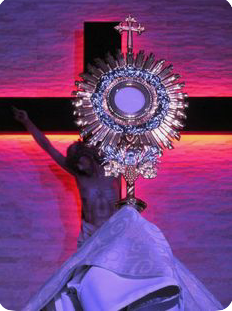 "If I am Redeemer, I am also by this very fact, the supreme Mediator between men and the Trinity, between the Trinity and men.

What a joy for mankind to have a God-Man, a Heart of Man-God, who bears his own bowels of love! What would mankind do if the Word had not taken on his very flesh?

In Me is the true Life, the unfailing Light, the infallible Truth; in Me is all, for I am the divine bond that unites earth with heaven.

I am God the Creator, God the Redeemer, God the Remunerator, Goodness itself, infinite Charity, and I rejoice as God-man to love, not only as God, but also with the fibers of man, with the heart and with the love of man.

And this is a beautiful point, like everything of the Divinity: everything in Me is present, that is to say, it is being; it not only was or will be, but it is, it always is, because of the simplest and infinite Being of unity.

For God was not the Creation, nor the Incarnation, nor the Redemption, nor the Glorification, nor the Resurrection, as past houses; but they are being, they are being worked, and they are always, always, glorifying Him.  For in the bosom of the Trinity there is nothing that does not glorify Him: heaven and hell, the past, the present and the future; and all this, always within God Himself, in the very Bosom of His divine Power.

In this sense, He knows which souls are saved and which are damned; but only because He is God, because given His infinite science, things cannot be otherwise in God.  But His loving will, His Being of Charity and the Heart of God-man do not want any soul to be lost; but to impart His happiness, from eternity to eternity, to every created being and even to be created; because God is all-present, the created and what is to be created.

I am in God and I am God, as the second Person of the Trinity; and man united to the Word with the indissoluble bonds of hypostatic union.

And the Word became flesh because He willed; and He offered Himself immaculate to the Father because His Charity wanted to atone for the sins of a flesh that He wanted to purify and save, to reward and remunerate man eternally.

By taking flesh, the Word sanctified the flesh, exalted man and won for him the resurrection of his flesh. How could He abandon it, if He had clothed Himself with human nature?  How could I let it be lost, if it had served as an envelope for the divine nature, for the divine Person, for his created soul, clear and pure, luminous and transparent, all serene, holy and without stain? How could I not reward that flesh that gave him a Heart, which the Incarnate Word takes as the infinite center of his tenderness, for his union with the divine of love?

There, in My Heart, divine love and human love fit together; the love of a God with all the most pure love of man!

Do you not glimpse with this something of the greatness, of the munificence, of the loving sentiments, divine and human, of a human God?

Do they not contemplate the elevation of man only because of the contact of the Word of God with human flesh; an incomparable and incomprehensible abasement, in spite of the purity of Mary's immaculate womb where it was realized?

What does sin matter, in a certain sense, if it had a redeemer who erases it with his own life?

God always surpasses in charity: he always comes out ahead when it comes to love; he always wins, and not with weapons and projectiles, but with love, with eternal and infinite love.

To make the Word man was also to have a motive, an occasion, worthy of a God, to prove his love for man; to display before his material eyes the magnitude of divine love made human. He became flesh so that the flesh might be divinized with Him, purified in Him. He lowered Himself, He became man so that man might become in a certain sense God and be consummated in His unity. (...)