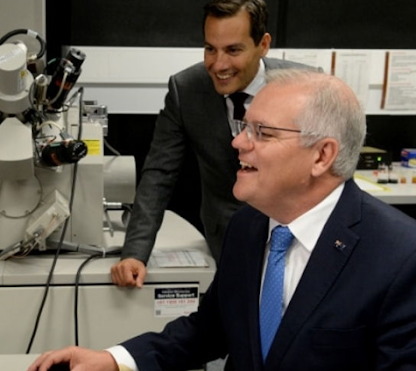 Australia and Moderna Strike Deal to Produce Up to 100 Million mRNA Vaccines Every Year; Triple Jab Combination Announced Including COVID, Influenza, and Respiratory Syncytial Virus
Australia and Moderna Strike Deal to Produce Up to Million mRNA Vaccines Every Year
A new deal between Australian authorities and Moderna will see millions of mRNA vaccines produced in the country every year with the potential for a combined COVID-19 and influenza jab in the future.
Prime Minister Scott Morrison announced on Thursday a 10-year partnership between the federal government, Victorian government and Moderna had been locked in.
Moderna will produce up to 100 million mRNA vaccines annually at a manufacturing facility in Melbourne as part of the deal, which has been described by the company as a “landmark occasion”.
“Australia is the first country in the world to reach an agreement with Moderna for on-shore manufacturing,” Moderna’s General Manager Australia and New Zealand, Michael Azrak, said.
“Australia is going to have on-shore capability of the most cutting edge research available today for mRNA respiratory vaccines.
“Yesterday it’s COVID but tomorrow it will be influenza, respiratory syncytial virus and other respiratory viruses into the future.”
Mr Azrak said Moderna was “investing heavily in developing combinations”, with the company this week announcing a new program targeting “three of the most significant viruses causing respiratory disease in older adults”.
“Just yesterday we announced we are going into the clinic for a triple combination, so COVID, influenza and respiratory syncytial virus for at-risk populations over the age of 50,” he said.
Health Minister Greg Hunt said having Moderna producing mRNA vaccines in Melbourne is about “saving lives and protecting lives”.
“It’s about pandemic resilience but it’s also about the bright vision and horizon of job creation and an ecosystem for world class research and translation,” he said.
“It’s about a manufacturing hub up for to 100 million mRNA vaccines a year both for annual needs in respiratory conditions, so not just COVID but potentially flu, potentially many other respiratory conditions, potentially combined flu and COVID shots in years to come.”
The announcement comes with Australia reaching the 95 per cent double dose vaccination target.
Moderna’s COVID-19 jab is one of two mRNA vaccines administered in Australia.
“What this arrangement with Moderna does, a multibillion-dollar investment, that provides for the future resilience of this country when it comes to not just pandemics but many other areas in which we have to deliver vaccines,” Mr Morrison said.
“mRNA, before the pandemic began, was largely looked on as almost science fiction, and now it’s a science reality and it’s a science reality here in manufacturing in Australia.
“There are few countries in the world that have been able to get to this point through the course of the pandemic, and certainly none in the Southern Hemisphere.”