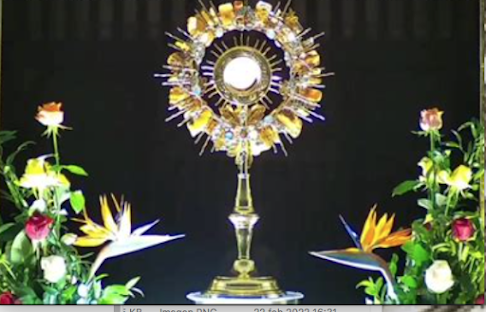 Father Brian Ahern, pastor of St. Gerard's Church in Geraldton, Australia, established a perpetual adoration chapel in his parish by giving up his personal room, since there was no other suitable place in the parish. God has blessed him with many vocations to the priesthood and many, many blessings for him and his parish. Father Ahern tells how one Holy Thursday Eileen Forth, a former Catholic from his parish, who had become a Methodist, came to visit him because she had thought that God was not in our Church, given the lack of fervor of the people she knew. On Holy Thursday she went to visit him with the exclusive idea of thanking him for what he had helped her when she was a Catholic. As the father was celebrating Holy Thursday mass, she went to the church and attended mass. At the end of the Mass, Father Ahern took the sacramentalized Jesus to the Monument and passed in front of her. When he saw her, he blessed her with the Blessed Sacrament and she heard the voice of Jesus say to her: Eileen, I am in my Church. I am really present in the Blessed Sacrament, but people do not know me and leave me alone and abandoned. Help me to renew my Church through perpetual adoration22.

Something similar happened in that parish to Ann Lucia and Nancy Laneri. And it is common knowledge that most, if not all Protestant converts to the Catholic faith, fall in love with Jesus the Eucharist, this being the fundamental point of their conversion.

Monsignor Josephine says: One night, Nonette Silla was in the chapel praying from 2 a.m. to 3 a.m., an hour before mine. It had been three weeks since she had commended to the Heart of Jesus a man who was destroying the moral lives of some of her friends. She included this man in her prayer and asked Jesus to bring this man to the chapel to be certain of his conversion. Three weeks later, while she was praying in that same place, she heard someone sobbing. Turning around, she saw that it was the same man she was praying for. He explained that for three weeks her mind had been very confused. He couldn't sleep and began to think that what he was doing was wrong. That night he was driving all over the city of Makati where he lived. When he passed St. Michael's Church, he saw the chapel light on. He found the light appealing and decided to enter. And there he found the mercy of Jesus in the Blessed Sacrament. That is why she was sobbing. When I arrived at 3 a.m., he told me his story, went to confession and, since then, has been coming daily to Mass and communion23.

The Monsignor himself says: One night, at St. Michael's Church, I had just finished my holy hour at 4 a.m., when a woman arrived in a cab. She wanted me to talk to her son. They lived in Parañaque. She told me that a voice had awakened her, telling her to go to St. Michael's Church. She got up just in time, because her son was about to commit suicide. And she brought him to me to talk to him. From that day on, the young man began to improve and is now doing very well.

21 Alabanza Magazine of the Charismatic Renewal of the Dominican Republic No. 139, 2000.