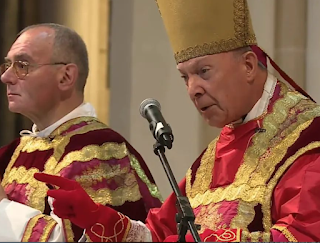 The news was published by Namur Diocese March 5 and spread on Gloria.tv by Antoni Baio Jilguero.

Léonard is a very Catholic prelate and friend of the Roman Mass who celebrated the 2019 Mass in Chartres.

He was attacked with custard pies in 2011 by fanatical homosexuals. In 2013, he remained calmly seated with eyes closed in prayer while four topless and hateful prostitutes attacked him, cursed him, and doused him with water.

Francis had no use for such an upright prelate. He retired him quickly and replaced him with a destructive successor who quickly turned Brussels Archdiocese into a wasteland.