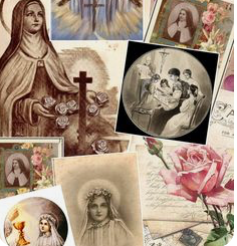 One Christmas day in 1934 Consolata noticed that the sister next to her in the dining room had eaten very little, because she was sad. She split a tangerine and gave her half of it. The sister said No, but finally agreed and ate the half tangerine. Consolata cut another one in half and gave it to her. The same thing: No; and in the end she accepted so as not to attract the attention of the others. For the third time, Consolata did the same and the other sister began to laugh. That was precisely what Consolata wanted, because in that way the sadness of her companion was dissipated.

On September 1, 1935, Jesus advised her: Consolata, if you have many things to do and you see a sister who needs help, do not go ahead, stay first to help her. I will think of you so that you can fulfill all your duties.

On May 8, 1936, she writes: I went to wash the dishes to do an act of charity. I was asked a question and I did wrong in answering and I felt bad and gave Mother an answer that would have been better if I had kept quiet. I went to the chapel to tell Jesus about my problem and my fault. Jesus helped me and I went to the Superior's cell and found her wanting to wash the dishes. I told her: "You have a lot to do". I took her things and went to the laundry room. That was enough to make reparation for my fault and the peace of my soul was restored.

Sister Gertrude fell ill with bronchopneumonia which degenerated into consumption. At the beginning of 1943 her condition was desperate and she asked Mother to be attended by Sister Consolata as a night nurse. How could I refuse this request? Sister Consolata always said yes to all -5. For 20 days and 20 nights Sister Consolata cared for her and had to give up her midday rest to attend to her. Sister Gertrude died on January 17. Sister Consolata wrote: That night, taking care of her, it seemed that everything was spinning and I could not stand up. I began to feel the consequences of those 20 days and 20 nights without rest. My head would not give me any more. I prayed to the Virgin and, as the sick woman was asleep, I tried to rest a little. At five o'clock, I was in a normal state and all day long, when I took care of her, Sister Gertrude smiled softly at me. She died in my arms.

On September 29, 1935, Consolata was thinking about the fact that there were 200,000 political prisoners in the prisons. She exclaimed: My God, there are 200,000 hearts full of hatred, suffering from despair, without a ray of hope within four walls. What terrible pain. You alone can comfort them. You alone can give them peace. Jesus, after my death, let me be the good sister, the Consolata of all, let me descend into the prisons to console them and bring them closer to you. Let me console each one who is imprisoned and suffering. And Jesus answered her, "Yes, Consolata, I promise you. After your death I will let you go down to the prisons. Write it down.

Consolata wrote: "I would like to fly to the battlefields as a Sister of Charity, but I would also like to be a military chaplain to absolve and thus eternally save the poor soldiers who are dying. But, if I cannot be with the soldiers, I can pray and offer myself for them. O Jesus, accept my offer so that no soldier will die without your forgiveness." Jesus replied, "Yes, he accepted you as a victim for every soldier and for all soldiers." It is also interesting to note that always, during her cloistered life, Consolata had in mind to make up for the evil caused in the Church by Luther and Calvin. On October 20, 1934, Jesus told her: "Think of how many souls Luther dragged into his errors. Protestants are millions. Remember your desire to do as much good as Luther and Calvin did evil."

On September 18, 1936, He said to her: "You will not only be Consolata of all for ever, but Consolation also of the Church in exchange for the pains I suffered for Luther and Calvin.

You are Consolata and you must be Consolata of all, of children and of the elderly, of the innocent and of sinners (September 18, 1935).

After my conversion in 1929, I had the desire to have my family officially consecrated to the Heart of Jesus. Teresio and Franca did so and the Sacred Heart took possession of my family in June of that year. Uncle Joseph was invited by surprise and was pleased. Teresio obeyed me "ad litteram" and in the morning they made a general communion and the consecration in the afternoon. Nine took part in that feast, three of them are already in paradise: my uncle José, Teresio and my father.

SISTER CONSOLATA BETRONE AND THE UNCEASING ACT OF LOVE