The Mockery Of Fatima 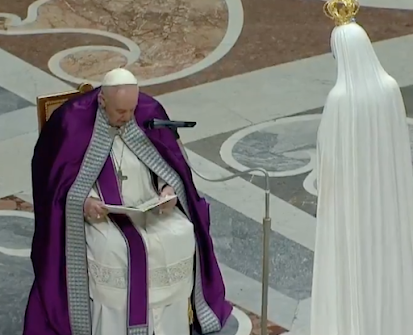 The prayer of “consecration” for Friday has been released. It is a total travesty of Our Lady’s request. The test is here.

It is, as everything that Francis says and does, a fraud.

It is the fruit of an extremely worldly Weltanschauung, according to which the problem is that there are wars, utterly forgetting that the Church has a doctrine of war, and a way to discern a just one.

It is, also, a prayer meant to address man and his sinful, because non-environmentalist and non-pacifist thinking, as a whole. The object of this ridiculous V II rant is humanity, not Russia.

Injustice, poverty, “all humanity” takes center stage. Russia in afterthought. Ukraine is – not explicitly, but clearly enough – defined as the victim.

This is no consecration of Russia to anyone. This is a vague hope for world peace, world environmentalism, and world pacifism where Russia enters merely because Francis wants to make it look bad. This is a mockery of what it was supposed to be. It is no surprise that Francis would do that.

He hates the cult of the Blessed Virgin, you know. I remember when he said that perhaps, at the foot of cross, the Blessed Virgin felt lied to (look it up: this was, if memory serves, the first or second year of Pontificate). To him – a man who obviously does not believe in God – the Blessed Virgin is merely the mother of “that guy”.

Don’t join in the prayer, and mock this pacifist , globalist, environmentalist nincompoop at every step.

In fact, a good thing would be to, at the appointed hour, pray for the painless death of this man.

Boy, how I long for a Catholic Pope again…