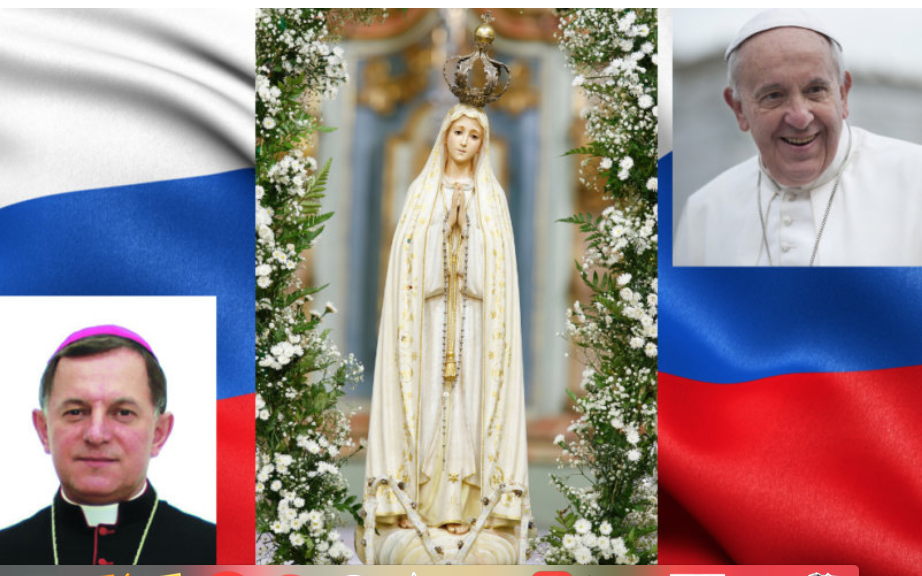 The bishops hope that this will bring an end to the conflict in Ukraine.

LVIV, Ukraine – The Roman Catholic Bishops of Ukraine have asked Pope Francis to “consecrate” Russia and Ukraine to the Immaculate Heart of Mary, “as requested by the Blessed Virgin in Fatima,” to bring an end to the current conflict.

In a short appeal released the morning of Ash Wednesday, March 2, the Roman Catholic Bishops in Ukraine addressed Pope Francis directly, urging him to complete the consecration of Russia as Our Lady of Fatima requested. Referencing Russia’s invasion of Ukraine, the bishops spoke of “these hours of immeasurable pain and terrible ordeal” and called for the consecration as a remedy for the conflict

Holy Father! In these hours of immeasurable pain and terrible ordeal for our people, we, the bishops of the Episcopal Conference of Ukraine, are spokesmen for the unceasing and heartfelt prayer, supported by our priests and consecrated persons, which comes to us from all Christian people that Your Holiness will consecrate our Motherland and Russia to the Immaculate Heart of Mary

Responding to this prayer, we humbly ask Your Holiness to publicly perform the act of consecration to the Sacred Immaculate Heart of Mary of Ukraine and Russia, as requested by the Blessed Virgin in Fatima.

May the Mother of God, Queen of Peace, accept our prayer: Regina pacis, ora pro nobis!

The Catholic bishops have also published a suggested act of consecration of Ukraine to the Immaculate Heart (full text below and pdf link here), which they encourage to be said privately and after Mass.

“Today, once again, we hear the call of Our Lady of Fatima to consecrate Russia to her Immaculate Heart, in accord with her explicit instruction,” he said at the 2017 Rome Life Forum.

“It is evident that the consecration (of Russia) was not carried out in the manner requested by Our Lady,” he added in October 2017. “Recognizing the necessity of a total conversion from atheistic materialism and communism to Christ, the call of Our Lady of Fatima to consecrate Russia to Her Immaculate Heart in accord with Her explicit instruction remains urgent.”

The cardinal doubled down in 2020, linking the global crisis caused through response to COVID-19 to the consecration not having occurred. “The consecration of Russia to the Immaculate Heart of Mary is more needed today than ever,” he said.

“When we witness how the evil of atheistic materialism, which has its roots in Russia, directs in a radical way the government of the People’s Republic of China, we recognize that the great evil of communism must be healed at its roots through the consecration of Russia, as Our Lady has directed,” Cardinal Burke continued.

When you see a night illumined by an unknown light, know that this is the great sign given you by God that He is about to punish the world for its crimes, by means of war, famine, and persecutions of the Church and of the Holy Father. To prevent this, I shall come to ask for the consecration of Russia to my Immaculate Heart, and the communion of reparation on the first Saturday’s.

If my requests are heeded, Russia will be converted, and there will be peace. If not, she will spread her errors throughout the world, causing wars and persecutions of the Church. The good will be martyred, the Holy Father will have much to suffer, various nations will be annihilated. In the end, my Immaculate Heart will triumph. The Holy Father will consecrate Russia to me, and she will be converted, and a period of peace will be granted to the world.

Pope John Paul II made an “entrustment-consecration” of the world, including Russia, to the Immaculate Heart of Mary on March 25, 1984, but he deliberately avoided making the explicit mention of Russia as Our Lady had requested.

German Cardinal Paul Josef Cordes confirmed in 2017 that John Paul II “held back [from mentioning] Russia explicitly because the Vatican diplomats had urgently asked him not to mention this country because otherwise political conflicts might perhaps arise.”

The late Father Gabriele Amorth, former chief exorcist of Rome, had already noted how the consecration had not been performed as requested, saying “a specific consecration has not yet been made.”

In light of the conflict between Russia and Ukraine, along with the growing global unrest, LifeSiteNews has resurrected its petition for the Pope to consecrate Russia as Our Lady specifically requested.