What would BXVI do during the consecration? 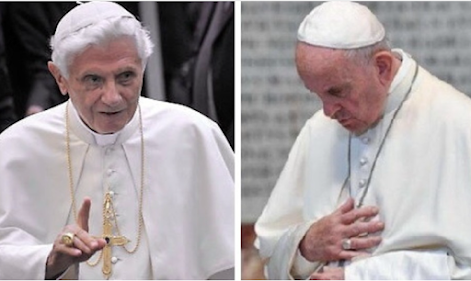 Yesterday, the news that "Pope Emeritus Benedict XVI WILL JOIN THE CALL of Pope Francis IN PRAYER regarding the consecration of Russia and Ukraine to the Immaculate Heart of Mary".

Therefore, he WILL NOT ATTEND directly to the consecration, and WILL NOT BE PHYSICALLY PRESENT at the ceremony in St. Peter's Basilica. He will "join the call", not the "intention", that is, "respond to the call" of Bergoglio, in prayer. But HOW will it do it?

Thus, two mirror possibilities open up: can you believe that Pope Benedict willingly adheres to the initiative of Francis, (perhaps, making the consecration valid?) Or, as the theologians explain, that he, on the contrary, exercising his power "Kathecontico", intends to mitigate with a PRAYER OF REPAIR, the serious "heavenly provocation" implemented by Bergoglio.

As far as we know, Benedict XVI, in the enclosure of his chapel, could very well make a specific prayer to nullify the offense against Mary Most Holy, who, according to the apparition of Fatima, asked the LEGITIMATE POPE to consecrate Russia alone.

Also in this case, it is up to you to choose the side: whether to believe in the first or the second possibility, but you have the umpteenth proof that Pope Benedict leaves the double interpretation open once again, so that only "those who have ears understand". Yet, even this constant ambiguity, unthinkable for a great theologian who is always very clear and precise, speaks clearly: if what a person says can be interpreted in two opposite ways every time, obviously there is something wrong, right? This attitude is explained only by the objective canonical reality of the impeded see, about which we have written abundantly