Cardinal Müller Pounces on An Underdog 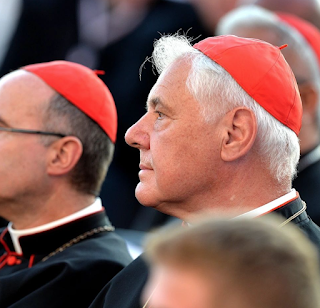 The state-salaried lay theologian Magnus Striet, 58, of the moribund Freiburg Theological Faculty exulted on Katholisch.de (25 April) that "the [German] schism has long been done."

Cardinal Gerhard Müller, 74, stated on Die-Tagespost.de (28 April) that for Striet the truth revealed by God is only a "fiction" of "spiritually limited" but simultaneously "quite devious bishops and popes".

For Striet, the core of the Gospel is not Christ's teaching and his death and resurrection, but Jesus' conflict with the Judean establishment, Müller analyses.

He complains that Striet does not identify this establishment with the German church functionaries with their "compliant representatives in bishops' garb", but with the Pope and the bishops in unity with him.

Does Müller really not know that there are no fewer "compliant representatives in bishops' garb" in Rome, all the way up to Francis, than in Germany?