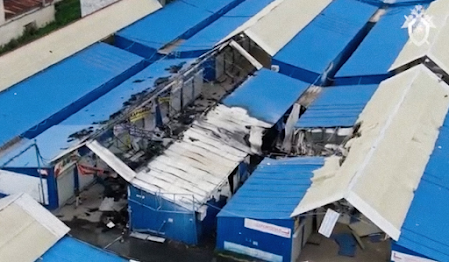 Russian investigators have opened a criminal case against the Ukrainian military unit responsible for the shelling, for the use of prohibited means and methods of warfare.

Investigative Committee of the Russian Federation.

Russia's Investigative Committee has initiated criminal proceedings over the Ukrainian Army's shelling of a neighborhood in the city of Donetsk on Thursday, which left four people dead and 23 wounded.

Investigators determined that on the evening of April 28, large-caliber artillery fire was opened from the area controlled by the 54th Mechanized Brigade of the Ukrainian Armed Forces.

The shells hit a southwestern quarter of the capital of the Donetsk People's Republic. In addition to civilian casualties, there were multiple material damages.

Video released by the Investigative Committee shows the aftermath of the attack on what appears to be a local market.

The Ukrainian servicemen are charged with the use of prohibited means and methods of warfare under the Criminal Code of the Russian Federation.