Bergoglio denounces 'fanatics' of the liturgy 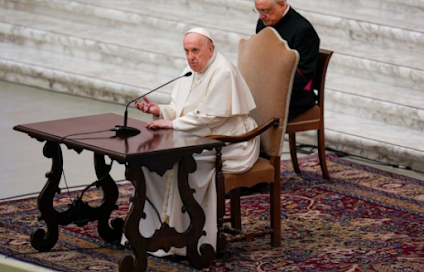 Pope Francis has harsh words for those who hew to old-school versions of liturgy, like the Latin Mass, saying they are sowing divisions among Catholics

ROME -- Pope Francis on Saturday blasted Catholics who, hewing to old-school versions of liturgy like the Latin Mass, have made an ideological battleground of the issue, decrying what he described as devil-inspired divisiveness in the church.

Francis pressed his papacy’s battle against traditionalists, whose prominent members include some ultra-conservative (?) cardinals. They have resisted restrictions, imposed last year by the Vatican, on celebrations of the old Mass in Latin in St. Peter’s Basilica and, more generally, for years have disparaged the modernizing reforms of the Second Vatican Council in the 1960s.

Speaking at the Vatican to instructors and students of the Pontifical Liturgical Institute, Francis said it’s not possible to worship God while using the liturgy as a “battleground” for nonessential questions that divide the church.

Francis has made clear he prefers Mass celebrated in local languages, with the priest facing the congregation instead of with his back to the pews. That was the way Mass was celebrated before the revolutionary Vatican Council reforms, more than a half century-ago, which aimed at making rank-and-file Catholics feel more connected to liturgical celebrations.

"I underline again that liturgical life, and the study of it, must lead to greater ecclesial unity, not to division,'' the pope told the institute's participants. "When liturgical life is a bit of a banner for division, there is the odor of the devil being inside there, the deceiver.''

"It's not possible to render worship to God and at the same time make a battleground of liturgy for questions that aren't essential,'' Francis added.

Last year, two prominent cardinals questioned the legitimacy of a Vatican decree placing restrictions of the celebration of the old Latin Mass in St. Peter's Basilica and forbidding private Masses in its side chapels.

Such traditionalists have openly voiced opposition to Francis. The retired chief of the Vatican's doctrinal orthodoxy office, German Cardinal Gerhard Mueller, contended that no one was obliged to obey that decree. U.S. Cardinal Raymond Burke, who was given the heave-ho by Francis early in his papacy from a Vatican post, called for the decree to be scrapped.

Francis also blasted what he called “closed mentalities" that exploit the liturgy.

“This is the drama we are living, in ecclesial groups which are moving away from the Church, putting in question” the authority of bishops and of the church, he said.

In 2016, a breakaway traditionalist Catholic group, the Society of St. Pius X, accused Francis of sowing confusion and errors about the faith, joining a chorus of conservative criticism over what they perceived as the pontiff's lax doctrine.

In 1969, the late Archbishop Marcel Lefebvre founded the society, opposed to the modernizing church reforms of the 1960s.