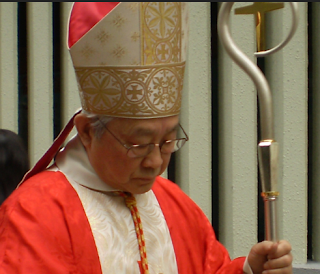 Cardinal Joseph Zen, 90, has been arrested in Hong Kong (May 11) by security police on charges of alleged “collusion with foreign forces,” under the terms of Hong Kong’s National Security Law (from July 2020).

The charges relate to the non-profit charity "612 Humanitarian Relief Fund" of which Zen was a trustee. The group was founded in 2019, but disbanded last year after security police ordered to disclose operational details. It helped pro-democracy protesters to pay their legal fees.

Scmp.com adds that the remaining trustee of the fund, Cyd Ho Sau-lan, is already in jail for her role in illegal assemblies.

His arrest pressures the Vatican to confront China’s crackdown on civil liberties in Hong Kong.

In March, Francis recorded a video message for Catholics in Hong Kong, "I wish you to be good citizens and that you are courageous in the face of the challenges of the time."

UPDATE: Zen was released on bail a few hours after the arrest.

Vatican spokesman Matteo Bruno told journalists that "the Holy See has learned with concern the news of Cardinal Zen’s arrest and is following the development of the situation with extreme attention."