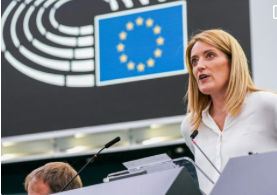 The EU Parliament's May 3 report “The persecution of minorities on the grounds of belief or religion” is hostile towards Christianity and defames religion as “an important driver of conflict worldwide.”

It condemns religions for upholding the truth on marriage and the protection of human life. According to the text, religion "contradicts and undermines" alleged [particular] "rights" of homosexualists and wants to “criminalise [criminal] abortion."

Slovak MEP Miriam Lexmann noticed during a Strasbourg debate that the text had been "hijacked" and that the parliament shouldn't take "ideological anti-religious stands." An initial draft referred to religion as a “human right” and “last bastion of liberty” in society.

The persecution of Christians in the Middle East and Africa is omitted [because it is sponsored by Western Regimes]. All references to Christians but one were removed from the text.

Instead, the pamphlet repeatedly expresses concern for the welfare of atheists, humanists and non-religious people.