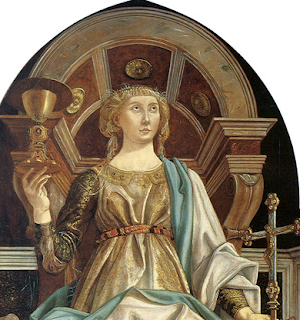 She had been involved with yoga, gurus, practitioners of witchcraft and magic for over ten years. By the grace of God, she had a profound experience of Jesus and it changed her life. Her eyes were opened to the evil in which she had been involved and she stopped all occult practices. She reverted to the Catholic faith with a new enthusiasm and conviction.

But the demons of divination, who had remained largely hidden, now made their ugly presence felt.* They mentally tortured her and she suffered demonic bouts of lethargy, mental pain, and depression. After many months of deliverance sessions, she is much better, although still not completely freed. The demons hang on.

She is progressively being purified and healed, peeling back inner layer after layer. She recently received a graced, critical insight that especially got my attention. She told me that she realized that, while she had stopped all these occult and magic practices, she still had an underlying magical way of approaching the spiritual life.

For example, when praying for someone, she sometimes would send her own "healing energy" directly at the person rather than asking God to help them. When she worried about someone or something, she might try to "visualize" the answer to the worry, trying to divine what will happen in the future, rather than asking God to take care of it. She sometimes found herself using her occult "third eye" to try to spiritually "see" or know something. She then said, "I realized I am still trying to control situations. I realized that I have an issue with real trust in the Lord."

She added, "The core issue is really trusting in the Lord- in His omnipotence and love for me." She said, "When I begin to practice a complete abandonment to God's providence like a child, I really feel free from this kind of magical thinking. This is when the demons seem to be the farthest away from me."

The difference between faith and magic is fundamental. The Christian trusts in God and humbly receives all graces from God, as He wills. The practitioner of magic and the occult attempts to control spiritual forces and access hidden knowledge, thus trying to gain the desired power and benefits.

Her insight is another great grace from the Lord. I am pleased for her accepting this grace. It suggests that her full liberation is one large step closer.

*It is not uncommon that a person practicing the occult will be deeply but unknowingly immersed in the demonic world. The evil ones keep their presence hidden. However, if the person then rejects the occult world and turns to the faith, the demons will no longer remain hidden and begin to torment and torture the person. For example, see: https://www.spiritofmedjugorje.org/index.php?ArticleSeq=162#featuredArticle.