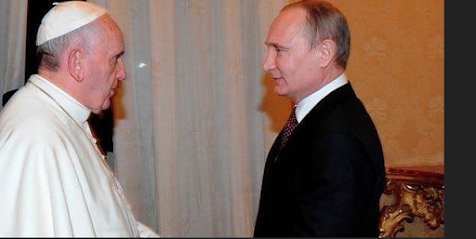 While Civil War Is Ravaging in The Church

Francis has asked for a Moscow meeting with President Putin, has not received a reply, but keeps insisting, he told the warmongering Corriere.it (May 3).

“I fear that Putin cannot, and doesn't want to have this meeting at this time.” In the meantime, Francis could actually ask for a meeting with the other war party, President Biden. Francis would “urge” Putin to make "peace" but has no plans for a trip to Kiev, the "hottest ticket in town" (Alex Christophorou), “First, I have to go to Moscow, first I have to meet Putin ... . I do what I can,” he insists.

He mocked Moscow Patriarch Kirill by saying that he “cannot become Putin's altar boy” and claimed that Hungarian Prime Minister Orban told him on April 21 that “the Russian have a plan, that everything will end on May 9,” the Victory Day [against Nazi Germany] which is celebrated every year throughout Russia.

Francis seems not to know that negotiations - unlike Synods - are not about empty blah blah but about mending the issues that have led to an escalation. In his own Church, Francis keeps fuelling the ongoing civil war.