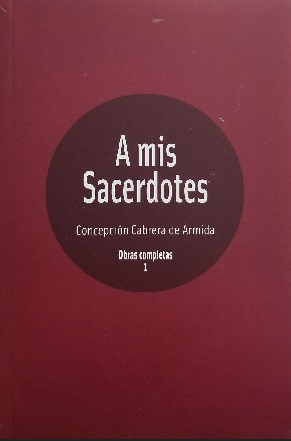 "TO MY PRIESTS" BY CONCEPCIÓN CABRERA DE ARMIDA.

Messages of Our Lord Jesus Christ to his favorite children.

And if priests want to reach that sublime union with the Father, they must necessarily transform themselves into Me, so that through Me--Me being in them and they in Me--they may ascend to the Father, and fall in love with the Father and become worthy, in His Son, of the charisms, graces and infinite love of the Father.

And in that unity are enclosed the three divine Persons with the divine attributes unified in the same perfection, in love! in a single Holiness in three distinct Persons, from which all things are born, from which all lives take life and whose eternal fertilization does not cease, nor will it ever cease, and will always produce more and more excellencies, beauties, charms, attractions, and everything harmonious, all ordered and holy within the unity.

Oh, do not be surprised that I speak so much of unity because it is my center, because I rejoice in it, because unity is God, it is love.

Since in God everything is present and He has neither past nor future, He is always begetting His Word; He is always not reproducing Himself, but being the eternal generation of the Son by the Father, and as a logical consequence, also the procession of the Holy Spirit, of the Father and of the Son, who eternally is and unites in the divine bond of an infinite, immense, incomprehensible Love, the Father and the Son.

The Trinity is constantly enjoying the fruitive contemplation of the Trinity itself. This divine joy is never exhausted: an eternity is not enough, speaking in human language, for one divine Person to exhaust the other in its contemplation. Each is absorbed in the charms, ever fruitful and ever new, of the other divine Persons; and they enjoy each other's beatific vision; one reflects in the other His infinite holiness and perfection, without ever going out of Himself, because God cannot go out of God in His immensity. Whatever He does has its reflection, and in its reflection He is Himself.

And one thing inexplicable to man is the eternal fertilization, without beginning and without end of God in Himself.

For what is it that germinates in that bottomless, shore-less ocean of all that is pure, holy, beautiful, harmonious? What? The fruitfulness of God, in God Himself, germinates in love, in the one Love; and this is inconceivable to man.

God realizes himself - if one can say so - and realizes himself in his own substance, which is love; the Three Divine Persons communicate love to each other, ecstatic in love. For love is everything, and the substance of love is God, is the Holy Spirit, who fills the Father and the Son-Love with love, who forms in their inmost being the essence of love; and in that love they look at each other, they recreate each other, they merge, forming in their unity one God-Love.

If all the holy loves of the earth are but a spark of that volcano of love, how will it be, to what degrees will that love ascend?  And if men feel joy and fruition and happiness in created love, in a spark of the divine love that intoxicates and makes the lover faint, what will be that infinite volcano of perfection, of equality, of affection, of union, of sentiments, of comprehensions, forming all a single unity, without dissonance, with the perfect harmony of the Trinity?

The supreme bliss of the Trinity is formed by the Trinity itself in its most holy fecundation in Itself. No one on earth or even in heaven will be able to understand this, because it forms a very principal part of the sublime and most holy secrets of the Trinity.

This ecstasy of love that God has in Himself does not prevent Him from taking care of souls, because the substance of God is love, and love is diffused, and divine love goes wherever it sees something of the very image of God; and souls bear this divine image; and the Church is to save these souls and extend in them the reign of God; and each body is a temple of the Holy Spirit and each heart is the ambition of God.

But, since God cannot love outside of God and God is in souls, it is precisely what He loves, what He wants to return to His Center, God, that He wanted to do even by immolating His own Son to save them. The image of the Trinity is what God loves in souls; and if they are lost, it is because they want to be lost; but God has provided the means and the supreme means, which is Me, Jesus Christ, so that all may be saved.

Sin erases the image of God as long as the soul does not repent; and only the soul that dies in sin, rejecting grace to the end, is condemned. But that soul and all the souls of the damned, even in eternal punishment, glorify me. In their eternal hatred, one of their greatest torments is not being able to exempt themselves from glorifying my Justice. They are branches voluntarily detached from the tree of life to burn eternally without being consumed; for what God does He does not undo, and those souls coming from God are immortal, whether for the prize, which is what My Heart longs for, or for punishment, which also glorifies Me.

There is also only one death, one hell, one reward, one punishment, one eternity, and all derived from unity, for all is encompassed by God. I give my graces, my forgiveness to the sinner, in my Church; but if he obstinately refuses them, if he does not give me glory by saving himself, he must give it to me by condemning himself. And my Goodness is as much my attribute as my Power, my Mercy as my Justice.

I have placed all the means of salvation in my Church through my priests; but if these means are rejected, the work of Mercy concludes in the other life to give place to the attribute of my Justice. To him who rejects Love and Mercy, which is love, whom can he approach and turn to?  That is why hatred succeeds Love.

God forgets all things, forgives all things; except that they outrage Love, that they reject Love, that they mock Love; because in Love is humble trust and hope; He is there, and without Him, without the theological virtues, there is no salvation possible.

Contrition itself is love and is born of love."