Minister Presides over Suicide in Her Church 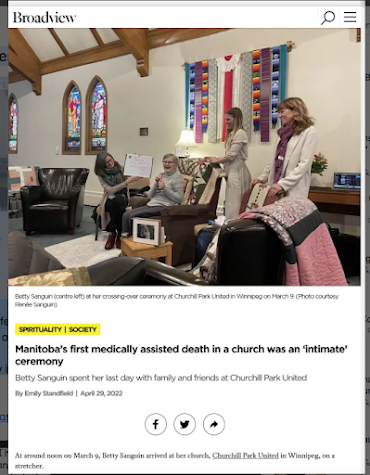 New Liturgy: Minister Presides over Suicide in Her Church

Betty Sanguin committed suicide by euthanasia in an “intimate ceremony” inside of the Protestant Churchill Park United Church in Winnipeg, Canada (March 9), according to a jubilant BroadView.org (April 29).

In spring 2021, the suicide was diagnosed with ALS after which she decided to kill herself expressing her wish that “the procedure” may happen at her church.

The church's leadership team unanimously approved the request. They called the evil deed a “crossing-over ceremony.”

The local minister Dawn Rolke offered a “blessing” expressing her belief that there was an “overwhelming presence of [evil] spirit during the ceremony.”

A reminder: What happens today in a Protestant church will happen tomorrow in a Catholic one.