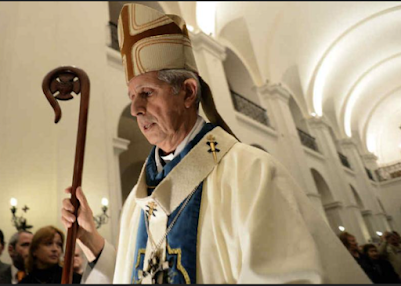 A November 2021 audit by the Congregation of the Clergy revealing alleged “uncontrolled real estate transactions” in Buenos Aire was made public now to hit Cardinal Mario Poli, 74.

Caminante-Wanderer.Blogspot.com (May 4) calls this an operation to smear Poli,

• The cases in question (a plot of land in Puerto Madero; a house in Palermo) do not imply any wrongdoing.

• Poli is a dull character but pious, honest, integer, and therefore has the support of his priests.

• Francis chose him as a puppet with the intention to govern Buenos Aire from Rome, but Poli didn’t play along.

• Francis’ agent in Buenos Aires is Auxiliary Bishop Joaquín Sucunza, 76, whom he “confirmed” (!) in his position beyond retirement age but Poli discharged him as Vicar for Economic Affairs. “From that very moment, revenge began to be plotted” (Caminante-Wanderer).

• Francis wants to replace Poli as soon as possible with the puppet Víctor Fernández.

• The priest involved in the matter is San Benito de Palermo Father Martín Bracht, an exemplary clergyman and good administrator who saved parishes and colleges from bankruptcy and never closed his church during the Covid hype.

• The Vatican accuses him of "an inordinate quest for the limelight, even to the detriment of his brother priests." Caminante-Wanderer, “This is nothing more than an expression of the jealousy and envy of his ‘brother priests’.”