Putin will not win the war--Chancellor Scholz 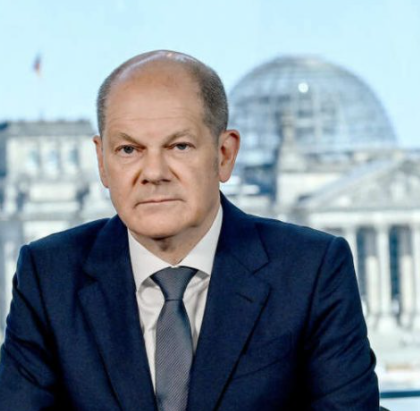 Scholz: “Fear must not paralyze us. Putin will not win the war.”

Chancellor Olaf Scholz addressed the nation on TV in the evening. In his speech, he emphasized the historical legacy of May 8 and explained Germany’s decision to supply heavy weapons to Ukraine

(…)77 years after the end of the Second World War, brute force is once again breaking the law in the middle of Europe. How Russia’s army kills men, women, and children in Ukraine, reduces cities to rubble, and even attacks those who are fleeing. For me, this is a May 8th like no other. That’s why I’m turning to you today.

President Putin even equates his barbaric war of aggression with the fight against National Socialism.

“Not supporting Ukraine would mean capitulating to sheer violence”

We learned a key lesson from our country’s catastrophic history between 1933 and 1945. It reads: “Never again!” Never again war. Never again genocide. Never again tyranny. And yet it happened again – war in Europe. This was pointed out by Ukrainian President Zelenskyy today. In the current situation, this can only mean: We defend justice and freedom – on the side of the attacked. We support Ukraine in the fight against the aggressor.

Not doing so would mean capitulating to sheer violence – and empowering the aggressor. We help so that the violence can come to an end. That is why we have made far-reaching and difficult decisions in the past few days and weeks – quickly and decisively, well thought out, and weighed up.

(…)And – for the first time in the history of the Federal Republic of Germany we have sent weapons to such a war zone, on a large scale – and always carefully weighing up heavy equipment. We’ll continue.

(…) Dear fellow citizens, I cannot yet tell you when and how Russia’s cruel war against Ukraine will end. But one thing is clear: there should not be a Russian dictated peace. The Ukrainians will not accept that – and neither will we. Rarely have we stood with our friends and partners as closed and united as we do today. I am deeply convinced: Putin will not win the war. Ukraine will survive. Freedom and security will triumph – just as freedom and security triumphed over bondage, violence, and dictatorship 77 years ago. Contribute to this as best you can, today that means “never again”! Therein lies the legacy of May 8th.”