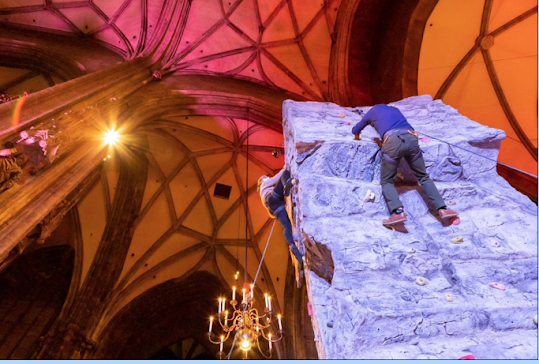 The Heights of Absurdity:

The Archlayman of Vienna, “Cardinal” Christoph Schönborn, has once again found a way to defile the Cathedral of St. Stephen and hold it up to the mockery of the world.

Although this time it wasn’t a homosexual prayer service, a flamboyant rock play, or a fundraising gala featuring the sodomite lobby that disgraced the sacred place, nonetheless the scandalous false shepherd once again managed to pull off an entirely farcical and unworthy spectacle in this temple originally consecrated to the worship of the Most Holy Trinity.

This week is exam week in Vienna’s higher education system, and the “Roman Catholic” archdiocese decided to offer a special spiritual “accompaniment” to students. In itself, of course, that is not a bad idea, and real Catholics would turn this into a beautiful opportunity for encouraging Catholic students to greater devotion, piety, and Faith, and also for apologetics and the evangelization of non-Catholic students.

Combined with a perfectly appropriate light-a-candle campaign and giving students the opportunity to receive a video message with a blessing from Mr. Schönborn himself, the Modernist archdiocese hosted a special “Mass” at St. Stephen’s Cathedral for high school graduates to ask for God’s blessing ahead of their exams. This took place on April 26, 2022, and it came with a gimmick.

According to a report issued by the archdiocese itself:

A rock-climbing wall, seven meters in height [approx. 23 feet], was put up inside the cathedral, [as a] symbol for the last few meters of the school journey. Vicar General Nikolaus Krasa and Johannes Hofherr, professional climber in the Austrian national youth team, climbed the wall during the Mass.

Once they got to the top, they told the students that they wished for their graduation to enable them to reach for the sky and that God would accompany them on their future life journey. 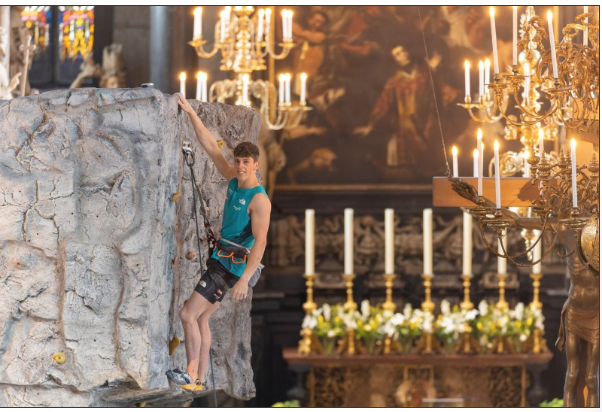 It is difficult to imagine a more corny and idiotic way to “attract” youngsters and make them enthusiastic about the (supposed) Catholic Faith.

If, on the other hand, the goal is to make Catholicism look idiotic, they have no doubt succeeded.