So what if Zelensky is Jewish, ‘Hitler also had Jewish blood’, —Lavrov 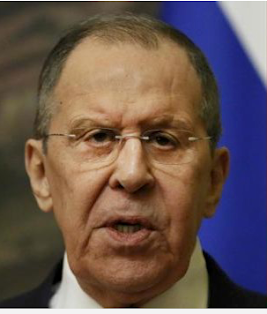 “So what if Zelensky is Jewish? The fact does not negate the Nazi elements in Ukraine. I believe that Hitler also had Jewish blood,” Mr Lavrov said in an interview with an Italian television on Sunday. “Some of the worst antisemites are Jews.”

Mr Lavrov was referring to an unproven theory that German dictator Adolf Hitler had possible Jewish and African ancestors (see the link on how Hitler’s surviving relatives have DNA indicating African and Jewish roots:  https://www.thetruthseeker.co.uk/?p=194076).

Mr Putin declared war on Ukraine on 24 February, describing it as a “special military operation” to disarm the eastern European country and remove leaders who he described as neo-Nazis.

Although Ukraine has a dark history of antisemitism, with the ultra-nationalist militia Azov battalion even fighting alongside the Ukrainian army in the three-month-long war, Nato and its allies see Moscow’s “denazification” bid as a pretext for an invasion.

The Russian minister said Mr Zelensky could promote peace between the two countries if he stopped giving “criminal” instructions to his “Nazi soldiers”, according to The Times of Israel.

Israel called Mr Lavrov’s comments “unforgivable” and “delusional”, saying he was suggesting Jews were to blame for their own genocide. Israeli foreign minister Yair Lapid calling the statement “scandalous and a horrible historical error”.

“The Jews did not murder themselves in the Holocaust. The lowest level of racism against Jews is to blame Jews themselves for antisemitism,” Mr Lapid said.