The intercessory power of St. Joseph 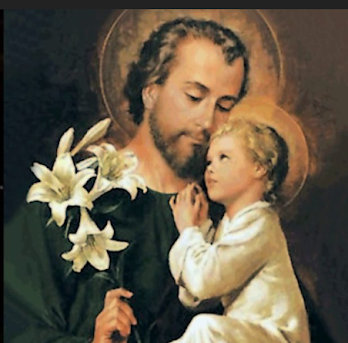 Let us look at the intercessory power of St. Joseph in two examples.

In the city of St. Louis in the United States, in the year 1866, there was a cholera epidemic that killed about 280 people every day for two months.

And in St. Joseph Parish, the pastor and superior of the Jesuit community, Father Joseph Weber, invited them to make a commitment to God to build a monument to St. Joseph, the patron saint of the parish, if the deaths stopped.

From the day they made the solemn promise to God through St. Joseph, the deaths in the parish, which previously numbered about 25 a day in the parish alone, stopped.

And not one person of the families who made the pledge died.

This miracle was recorded as an authentic fact in the parish documents of the year 1866, to the glory of St. Joseph.

This other case is told by the Venerable Consolata Betrone, the mystic who had communications with Jesus Christ, the Virgin Mary and St. Joseph.

She recounts that on Wednesday, April 17, 1935, at communion, she offered her father to Jesus so that, if it was his will, she could take him to Him before the end of the year.

That same day his father died.

And then Jesus asked, "Where is my father?

- He is in purgatory, Consolata.

- I will deliver him on Saturday morning.

The next day, Holy Thursday, she heard her father's anguished voice saying in dialect: I suffer so much!

And Jesus inexorably told him that only on Saturday could he free him.

So he entrusted himself to St. Joseph, choosing him as his father.

He appeared to her with the Virgin Mary and said to her: "Consolata, what is it?

- Consolata, what is wrong, are you sad?

- St. Joseph, my father is in purgatory and Jesus does not want to release him until Saturday morning.

- Don't worry, He will release him tomorrow, Good Friday.

- Oh, if I ask Jesus tomorrow he will release your father.

And on Good Friday, when she was at Mass, her father appeared to Consolata, just out of purgatory.

And where does the intercessory power of St. Joseph come from?

Joseph received the mission of being a key character in the infancy of Jesus.

And he fulfilled that mission by being obedient to the requests of an angel sent by God.

God communicates to Joseph, through dreams, which is his role in the prophetic mission of Christ.

And as a man of faith, obedient, he collaborates with all that he is ordered.

And he is erected in the custodian of the salvation of humanity, through the child that Joseph will have to take care of and educate.

His central role on earth was to protect God's plan that began with the Incarnation of Jesus Christ.

And so he gained stature in the eyes of God.

Dream of my request when the angels come to you in your rest.

Ask Our Lady and Our Lord for my request, and protect my family from nightmares.

Dream for me, Terror of Demons, a happy death and protection from hell.

And on my last day in life, when I pass into eternal sleep, stay with me to take me to the kingdom of your Son.

St. Joseph prays for us

The Bible relates four dreams in which the Angel of the Lord gives Joseph fundamental instructions, which are not necessarily the only ones that Joseph would have received, but they are probably the most important…