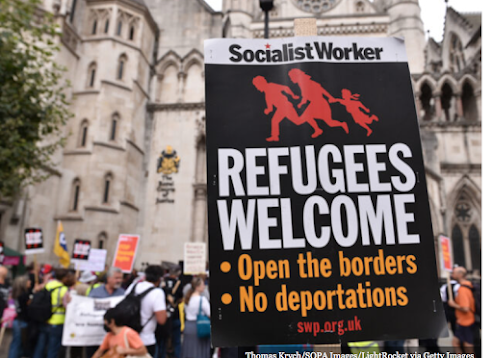 Ending Western sovereignties, their culture and idiosyncrasies, especially Christianity and the white race, mixing the population of various countries in addition to annulling borders, is a goal of the shadow powers, for a New World Order, of which bergoglio is the `moral' puppet.

Number of Refugees Resettled in Britain Increases 56-Fold to 240,000 Over Past Year: Migration Watch

The number of refugees resettled in Britain through official schemes has increased by 56 times over the past year compared to the average over the the previous five years, according to a report from Migration Watch UK.

The think tank, which advocates for reasonable border control against mass migration said that direct refugee immigration to the UK over the past year totalled approximately 240,000 people, up from an average of around 4,200 per year between 2015 and 2020.

The massive increase in refugee resettlement in Britain was driven in large part by Ukrainians and Hong Kongers fleeing their homelands. According to the Migration Watch analysis, around 150,000 refugees from Ukraine have arrived in Britain since the start of 2021, while another 120,000 people have used the British National Overseas (BNO) route offered to those fleeing from Hong Kong after the brutal crackdown on freedoms by the Chinese Communist Party to resettle in the UK.

An additional 21,450 refugees have come to Britain from Afghanistan following the country’s fall to the Taliban after the bungled withdrawal from the country by the Biden administration.

The think tank noted that “worryingly” the government has so far been unable to identify which specific legal routes those fleeing from Afghanistan have used to get to the UK, highlighting the ramshackle efforts during the chaotic fall of the country.

In comments provided to Breitbart London, Migration Watch UK Chairman Alp Mehmet said: “The latest Migration Watch analysis has revealed a remarkable 56-fold increase in resettlement compared to 2015-2020 levels. This after the government had clearly promised voters that overall immigration would come down.

“The breath-taking scale of resettlement has major implications for communities and involves large amounts of public funds being spent on accommodation (including hotels) and places ever greater pressure on services. It is at an unsustainable level. We must control our borders and reduce immigration without delay.

“Meanwhile, over a year after the Taliban seized power, the government still can’t tell us the numbers who have arrived respectively via each of the specific resettlement routes from Afghanistan. This failure to release adequate data hugely damages transparency and accountability and is a disservice to the hard-pressed taxpayer.”

Security concerns were raised about the vast numbers of Afghans evacuated in the wake of the unilateral American withdrawal from the country, with the UK Border Force admitting last year that many Afghans were arriving in the country with forged identity documents.

Following reports of people on no-fly terror lists being evacuated into Britain — apparently in error — Breitbart London questioned the Home Office as to how many Afghans who were brought to Britain turned out to be either on watch lists or persons previously deported from Britain, but the Home Office replied that it was “not in the public interest” to reveal such data.

In addition to the massive influx of refugees through legal channels, the UK asylum system has already been strained by the migrant boat crisis in the English Channel, in which nearly all of the illegal aliens who arrive by people-smuggler boats from France claim asylum in the UK, despite coming from a safe European country where they should apply for asylum.

According to analysis conducted by the PA news agency, some 75,628 migrants have been recorded making the illegal journey, with another 856 arriving on Monday, marking the fifth straight day of illegal landings.

In addition to record levels of illegal immigration and soaring numbers or resettled refugees, legal immigration has also jumped to new highs, with Boris Johnson’s government handing out a record 1.1 million visas to foreigners last year.

While recently installed Home Secretary Suella Braverman has said that she would seek to finally fulfil the longstanding but never realised pledge from the Conservative Party to reduce net migration down to the tens of thousands. However, embattled Prime Minister Liz Truss has reportedly already sidelined the Brexiteer Home Secretary from the immigration debate, likely pointing to another Tory administration failing to fulfil the promise.

Responding this week to the failures of the Tories to take back control of the nation’s borders, Brexit leader Nigel Farage wrote in The Telegraph: “However much the posh boys in it convinced themselves that the Brexit vote in 2016 and the Red Wall gains in 2019 were about the concept of sovereignty, it is immigration that drove those results. Voters have been utterly betrayed. They are angry.

“The Tories will be wiped out at the next election, just as they were in 1997, and they thoroughly deserve it.”