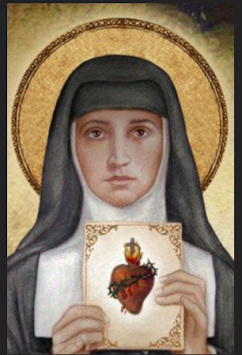 It is not hasty hyperbole to state that Saint Margaret Mary was given the most awesome vision that can be shown a mere human. In her short life - she lived to be 43 - Jesus revealed to her His Sacred Heart and taught Margaret Mary the ways us ordinary people may adore His Heart.  Jesus sent an atom of His Heart into the heart of Margaret Mary, so that the tiniest bit part of the Sacred Vessel of His Blood had a home in her own pulsating heart.

While the sublime revelations Jesus gave Margaret Mary must always take centre stage, we may dwell on the miracles that Margaret Mary worked when she was alive. She lived in the 1600s, and developed a reputation as a miracle worker while she was still living, and now she is a wonderful intercessor in Heaven, which is why we celebrate her on this day designated as her feast.

Let us first recall that Margaret Mary's first years in her convent were very tough and her mother superior held her in bitter contempt. But towards the end of her life, the hate the other sisters had in their hearts for her was transformed into love. Her biographer Jean Joseph Languet writes exultantly, "her patience and humility triumphed over all, and the Son of God changed the hearts which began to honor His." The other sisters - behind Margaret Mary's back - started collecting items she had used. They were essentially hoarding relics of her, and there was a great demand for pieces of her hair from visitors to the convent.

Margaret Mary was mistress of the novices in her convent. One young woman became a postulant and she was only there a few days when she wounded her leg with an axe. She had been cutting wood with the axe that hit her instead of the block, and so afraid was she that the other nuns would think her incompetent that she hid her injury. It was not wise to hide the fact that a blade had sliced her leg, and she was in horrible pain. But she was given the light that if she touched the black habit of Margaret Mary she would be miraculously healed. So she crept up behind Margaret Mary and touched the thick dark folds of wool and she was instantly cured. It has to be stressed that the young postulant had heard of other people with bad infirmities who were healed after they touched Margaret Mary's habit. When the young postulant told Margaret Mary that a ghastly wound had disappeared from her leg, Margaret Mary was alarmed that the black frock she wore had been the vehicle of a miracle and she begged the young postulant to keep it a secret. Fortunately, for you and me, the postulant could not restrain herself and made it known.

There was a very holy priest who fell deathly ill. Those who nursed him thought he was on the precipice of death. This was the 1600s and medicine was not as advanced. The man seemed to be in the grips of a stroke. He had lost all feeling and could not move. Also, his lungs were filled with fluid and he was suffocating. No adequate diagnosis was given, but his teeth were clenched shut and they had to break a tooth so that they could squirt in some medicine. Margaret Mary was asked to pray for him, and after she did, she gave this instruction: that he was to have some water in which they had dunked a note she wrote. The note had a handwritten invocation to the Sacred Heart. Margaret Mary had the gift of prophecy and she assured all that the young priest would recover fully which was a bold statement to make in light of his total paralysis. She also said that he would have a great role in spreading devotion to the Sacred Heart.

Well, no sooner had the priest had the water that had been touched by the note put in his mouth, when he recovered totally.  And he went on to teach others about the Sacred Heart with such zeal that Margaret Mary's words came to pass fully. The priest's brother later gave a deposition under oath to support the case that a miracle saved this young priest from an early grave.

There was a sister who suffered from terrible anxiety. She confided her mental anguish to Margaret Mary who had heard from the Lord as to how this woman's troubles would be ended. Margaret Mary told the sister that Jesus wanted her to have more love for Him and to trust Him more. Then she instructed the sister, "More especially, He wishes you not to abstain from Holy Communion." The sister had been failing to receive the Eucharist. But she began to receive the Sacred Species frequently and her anxiety vanished and she was filled with peace.

Some would consider the following a more minor miracle, I, however, hold it up as a great one. One of the nuns had a brother who was an officer in the king's army, and Margaret Mary foretold he would be mortally wounded in combat but that he'd be given a singular grace for his salvation. Sure enough, the soldier got death blow to the head during the siege of Landau which ought to have killed him instantly. But to the amazement of the army medics, he lived for two more days and received the Last Rites in a state of abandonment to the will of God and he appeared as one holy and happy. The miracle was that his life was prolonged by some days so he could make a final confession and have a provided for death.

Margaret Mary became known more widely for her gift of reading future events, and once a young novice under her direction had the idea of planting a fruit tree, that some day she would enjoy the fruit. But Margaret Mary halted this plan, "It is not worth your while," she told the young novice, "for you will not be a religious in this house." It came to pass that the novice did leave. Margaret Mary foretold that of the 14 who had joined, only 2 would remain to become professed nuns. Her words came true to the letter and the novice who had wanted to plant a fruit tree was one of the 12 that departed and returned to the world.

The above is just a short selection of the miracles worked by Margaret Mary, and there were many more that she asked be kept secret. The same cure for anxiety that she prescribed - frequent reception of the Eucharist - may be our cure, too. But perhaps we need bear in mind Margaret Mary is the patron saint of polio. She was canonized on May 13, 1920, on the heels of polio outbreaks around the United States.  I personally knew one very elderly lady who had fantastic devotion to Margaret Mary. Long ago, when her little child was direly afflicted by polio, she prayed to Margaret Mary and her child's recovery was so complete that it baffled the doctors and the little one went on to have rude health. This saintly mother confided in me (so that I could write about it anonymously). But she could never bring herself to publicize the great grace given her family, she felt it would make other people feel left out. I share it now because it speaks to the grand intercessory powers of Margaret Mary.

We adore Jesus's Heart, but we may also venerate Margaret Mary.

A very happy feast day of St Margaret Mary to you and yours!

This post was informed by Jean Joseph Languet's biography of St Margaret Mary. The classic work of art that accompanies this post was executed by Tommaso Gazzarini.