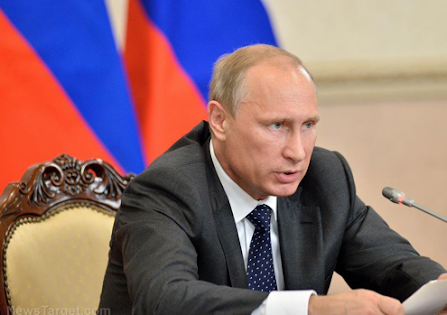 (Natural News) China has ordered its remaining citizens in Ukraine to leave the country immediately, sparking fears that Russia is preparing to significantly ramp up its invasion.

“With the current grim security situation in #Ukraine, China’s Ministry of Foreign Affairs and Chinese Embassy in Ukraine on Sat urge Chinese citizens in the country to enhance safety precautions and evacuate. The Embassy will assist in organizing the evacuation of people in need,” one Chinese diplomat wrote on Twitter over the weekend.

Last week, Russia launched a two-day campaign of air and missile strikes targeting civilian infrastructure in Ukraine after an attack heavily damaged a vital bridge — Europe’s longest — connecting the Russian mainland with Crimea, which President Vladimir Putin ‘annexed’ in 2014 without firing a shot.

Experts believe that the Chinese may have knowledge of Russian plans and as such, Beijing is making an effort to get its citizens out of harm’s way quickly ahead of new attacks.

The Chinese foreign ministry and embassy warned of the “grave security situation” and ordered an immediate departure, going on to cite the need “to enhance safety precautions and evacuate.” The statement indicated that “the embassy will assist in organizing the evacuation of people in need.” Russian state sources also on Sunday began publicizing the new alert notification.

China state media Global Times writes: “Some Chinese nationals still in Ukraine have signed up for evacuation from the country, with most registering for organized evacuations, while others are preparing to leave Ukraine on their own, the Global Times learned on Sunday, after the Chinese Foreign Ministry urged Chinese citizens to leave Ukraine, citing the grave security situation.”

It’s not clear when new attacks may come, but recall that late last month, Russian President Vladimir Putin – after suffering staggering personnel and equipment losses in Ukraine thanks to the country’s fighting spirit and an influx of precision weapons, mostly from the United States – ordered 300,000 conscripts and military reservists mobilized to active duty. Reports this week say that more than two-thirds of those fresh troops have been processed and are in preparations for shipping out with most headed to Ukraine.

Speaking of U.S. weapons, the Pentagon announced last week that war stocks for American troops are being drained without replacements coming fast enough, meaning that the Biden regime will have to slow its shipments of weapons to the Ukrainians – or do what President Donald Trump implored our NATO allies to do when he was in office; step up themselves and help more. We’ll see if that happens.

In the meantime, the Russians appear to be on the brink of a major escalation in Putin’s war against Ukraine, meaning he is ready to dig in for the long haul. Much more death and destruction is on the horizon if the two sides continue to refuse to negotiate.