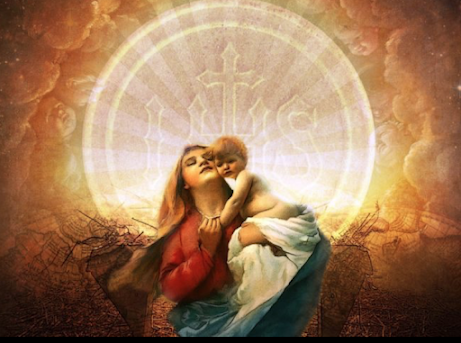 THE DIABOLIC POSSESSION OF ANNELIESE MICHEL

*The devil's "revelations" during exorcisms.

In the 1970s the possessed mystic Annaliese Michel paid for the sins of Germany, particularly those of the apostate clergy.

During the exorcisms, the devil revealed that he is the true inspirer of religious "reforms" within the one true Church founded by the Son of God (new theology, new liturgy, new pastoral care, etc.) and of civil "progress" in the 20th century (atheism, materialism, divorce, abortion, euthanasia, homosexuality, etc.).

Annaliese was followed by Priests, the Bishop authorized exorcisms, and there were two exorcists who helped her-Don Ernst Alt and Don Arnold Renz.

Exactly 65 exorcisms were performed, between September 24, 1975 and July 1, 1976. Already from the first one, a disturbing situation emerged. During the ritual, performed according to the Roman Ritual, the demons began to speak without even being questioned.

Almost everyone is familiar with the 2005 horror movie "The Exorcism of Emily Rose," however, not everyone knows that it is based on a true story, first told in 1981 by writer Felicitas D. Goodman (1914-2005) in her book titled "The Exorcism of Anneliese Michel."

Anneliese Michel died on July 1 (Feast of the Precious Blood of Jesus) in 1976. An autopsy showed the presence of the stigmata, which she had kept hidden out of humility. Exhumed twice, in 1978 and 1984, her body was found incorrupt.

Anneliese belonged to a pious German family; diabolic possession was discovered when she was 16 years old.

Anneliese's story aroused interest in Germany, showing how much her country needed her suffering in reparation. Liberal, Masonic and progressive anti-Catholic lobbies began a smear campaign against the Catholic Church.

After the last exorcism, she was exhausted: she weighed only 31 pounds, had deep circles under her eyes, and the demons had even broken her teeth.

During an exorcism, the demon was forced to give the following explanation:

"The thing (Holy Host) cannot be placed on the hand. Priests must be courageous. The laity cannot distribute it. During the distribution of that stuff (Holy Communion) one has to kneel down. By order of that one there (pointing to a statue of Mary placed nearby), one must get rid of the Communion on the hand, because it is my doing. The bishop must forbid the administration of Communion on the hand, if he can."

"Everyone is now pulling out their paws to take Communion and not even kneeling anymore! Ah! All this is my doing!"

"So many Hosts are profaned because they are given on the hands. They don't even realize it!"

The exorcist: "You are the culprit of all heresies!"

Response, "Yes, and I have many more to create."

"The enemies of the Church are our friends!"

The devil reveals his plan against the Church

These are some of the most important "revelations" made by the devil during exorcisms to Anneliese. One must reflect at length on these words.

"Communion on the hand incredibly offends God. We, however, rejoice in it."

"The Host in the hand offends God and leads to the damnation of souls."

"Everyone is now pulling out their paws to take Communion and not even kneeling anymore! Ah! Everything is my doing!"

"So many Hosts are profaned because they are given on the hands. They don't even realize it!"

"The altar facing the faithful was our idea. They all ran after the evangelicals like harlots! Catholics have the true doctrine and they run after Protestants! ".

"Standing Communion was a beautiful victory."

"The Consecrated Host must be given only in the mouth. Only the Priest can give Communion."

"Kneelers should be put back in the Church and should be used by everyone... Souls should kneel before the Blessed Sacrament; it is their God and they do not worship Him. We, however, do not want that... We want people not to kneel in the Church."