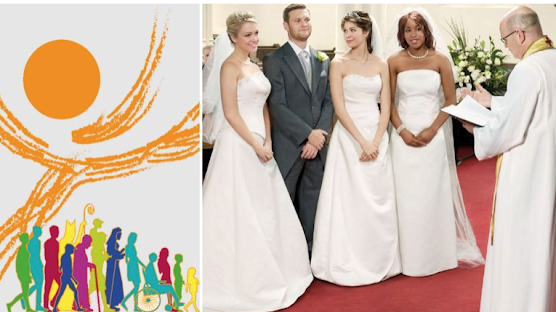 VATICAN CITY (ChurchMilitant.com) - Pope Francis' synodal project is embracing strident demands for the "radical inclusion" of Catholics who are living in polygamous, LGBT or divorced and remarried unions.

'Experts' meet in Frascati to draft the DCS

The synod's "Working Document for the Continental Stage" (DCS) also calls for women preachers, female deacons and the inclusion of women in the governing structures of Church bodies.

The document raises the subject of the "children of priests who have broken the vow of celibacy," after centuries of silence on the topic regarded as taboo, and notes that priests who left ordained ministry and got married are asking for a more "welcoming" Church.

"The message of our synodal way is simple: We are learning to walk together, and sit together to break the one bread, in such a way that each is able to find their place. Everyone is called to take part in this journey; no one is excluded," the report states.

Released Thursday at a Vatican press conference, the 45-page document claims to be a compilation of diverse voices from the global Catholic Church and a synthesis of the synodal process at diocesan and national levels.

The document is titled "Enlarge the Space of Your Tent" — the text of a verse from Isaiah 54:2. It presents the image of the "tent" as a place of "radical inclusion" from which "no one is excluded" and serves as a hermeneutical key to interpreting the DCS, the report notes.

Underscoring the need for "mission," the DCS insists that Catholics need to carry out this missionary task "with brothers and sisters of other confessions and in dialogue with believers of other religions."

The problem with 'radical inclusion' is that it rejects this biblical paradigm as if there were no evil.

"Radical inclusion is simply the abuse of two words by the Left in order to reconfigure the boundaries of exclusion. What becomes excluded is Judeo-Christianity and what becomes included is perversity and transgression," theologian Dr. Gavin Ashenden told Church Militant.

"The purpose of the separation is to distinguish between the sacred and the secular, between the holy and the unholy," Ashenden observed. "The problem with 'radical inclusion' is that it rejects this biblical paradigm as if there were no evil."

This is a metaphysical, philosophical and biblical error and a very serious heresy. Hence, whenever the term 'radical inclusion' is used within the Church, it signifies that the people using it are heretics who deny both the existence of real evil and the biblical and ecclesial task of making the distinction not only between good and evil but between those who exercise their free will to choose between good and evil and those who don't.

While the DCS mentions the need for the Church "to renew its evangelizing mission in the light of the signs of the times," it redefines evangelism as "offering humanity a way of being and living in which all can feel included as protagonists."

The purpose of the separation is to distinguish between the sacred and the secular.

The synod document affirms the need to reform the liturgy even further by "rethinking a liturgy too concentrated on the celebrant, to the modalities of active participation of the laity, to the access of women to ministerial roles," as well as to improve the "poor quality of homilies."

"Many reports strongly encourage the implementation of a synodal style of liturgical celebration that allows for the active participation of all the faithful in welcoming all differences, valuing all ministries and recognizing all charisms," it notes.

Proposals to remedy the situation include "habitually linking liturgical celebration with the various forms of dialogical sharing and fraternal conviviality," like sharing food together.

The DCS records concerns over limited access to the pre-conciliar Mass and the 1962 Missal, as well as problems related to the inculturation of the liturgy and interreligious dialogue, "which also affect the forms of celebration and prayer."

On ordaining women, it quotes a New Zealand episcopal conference report, which states that the "lack of equality for women within the Church is seen as a stumbling block for the Church in the modern world."

"Much greater diversity of opinion was expressed on the subject of priestly ordination for women, which some reports call for, while others consider a closed issue," it adds.

"Many summaries also give voice to the pain of not being able to access the sacraments experienced by remarried divorcees and those who have entered into polygamous marriages," the document laments.

"Remarried divorcees, single parents, people living in a polygamous marriage, LGBTQ people, etc." want "the Church to meet people wherever they are, to walk with them rather than judge them, and to build real relationships through caring and authenticity, not a purpose of superiority," the DCS asserts.

Citing the concerns of Catholics in homosexual relationships in Lesotho, Africa, the DCS appeals for discernment on the part of the universal Church, noting that "this is a problematic challenge for the Church because these people feel excluded."

Everyone is called to take part in this journey, no one is excluded.GabTweet

While the issue of LGBT inclusion has regularly surfaced in official synodal conversations, the inclusion of polygamy in the working document is intended as a jab at the African churches that fiercely oppose homosexual and transgender inclusion.

"Many polygamists are Mass-goers," writes Dr. Antoine Roger Lokongo, and "even occupy prominent positions in the Church" in Africa.

"If Westerners in irregular situations can receive Communion, are we to tell our polygamists and other 'misfits' that they too are allowed?" South African Cdl. Wilfrid Napier asked in 2017.

Fr. Terry Drainey, a missionary to Kenya, says that the Church is "fighting a losing battle" against polygamy. Forty percent of married women were in polygamous unions at his parish in the heart of the predominantly Christian South Nyanza district.

According to the Catechism of the Catholic Church, polygamy "directly negates the plan of God which was revealed from the beginning, because it is contrary to the equal personal dignity of men and women who in matrimony give themselves with a love that is total and therefore unique and exclusive."

The DCS will be forwarded to all diocesan bishops, who will be asked to conduct a "process of discernment" based on the three key questions.

Bishops' conferences will synthesize these reflections and send the summaries to the continental assemblies. At the end of each assembly, a final 20-page document will be drafted and sent to Rome before March 31, 2023.