Francis and the LGBT agenda in the Church - Müller 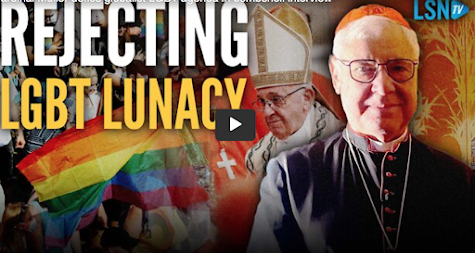 (LifeSiteNews) — In a new interview with LifeSite’s Jim Hale, Cardinal Gerhard Müller has made it clear that in the midst of a “hostile takeover” of the Catholic Church by the “LGBT lunacy,” we Catholics have to “stay firm in the truth,” trusting that “Christ will win in the end.”

In the exclusive interview, the German cardinal strongly rejects the LGBT agenda that is continuing to creep its way into the Catholic Church, which he reminds the faithful goes as far as promoting the “criminal idea” of the “castration of boys.”

He called such procedures – done in the name of the “transgender” agenda – an “abuse of the young children,” of “minors.”

Müller sat with Hale for the interview during his visit to Philadelphia, Pennsylvania for the Cardinal Gerhard Müller Symposium running from October 7 to 9.

The interview covered the cardinal’s recent remarks to EWTN’s Raymond Arroyo about the “hostile takeover of the Catholic Church” by pro-LGBT Catholics, the recent August meeting of the College of Cardinals with Pope Francis in Rome, as well as the duties of the pope in safeguarding the Catholic faith.

Hale pointed out that it is the pope himself who appoints such prelates to important positions, and it is these appointees who are promoting the LGBT agenda in the Church.

The cardinal responded by saying that while he does “appreciate” the pope’s work for “social justice and for peace,” “the first task of the Pope is to be the guarantor of unity and of faith.”

Indirectly correcting the Pope’s approach to put the pastoral aspect over the defense of doctrine, Müller insisted that “I cannot separate Christ the Good Shepherd from Christ the Teacher,” adding that “the pastoral is not against doctrine.” Emphasizing that we are all called to make a “confession of the revealed faith.”

Francis, throughout his pontificate, has stressed the importance of mercy and of welcoming those who do not live according to God’s Commandments, while at the same time making derogatory remarks about those faithful Catholics who insist on defending the Church’s doctrine.

“We must stay strong, firm in the truth,” Müller insisted, adding that those people in the Church who are pushing an agenda that goes against God’s teachings are “delegitimizing themselves.”

“The truth of the faith is on the on the side of those who are faithful to Jesus Christ,” added the cardinal.

Here, the cardinal was making reference to the Protestant Reformation in England in the 16th century, when two bishops and one great layman – St. Thomas More – were “on the side of the truth.”

The same is to be seen in the early Church during the Arian crisis, he went on to say, where “in the end, we had the victory of the truth.”

Müller also referenced the recent guidelines of the Belgian bishops, who in September published a document in support of the “blessing” of homosexual couples.

This step by the Belgian bishops, he expounded, is “nothing more than a justification of homosexual marriage,” even if they are hiding this plan behind “propaganda.”

“But if you take away the propaganda,” the cardinal explained, “it’s nothing more than heresy against Christian marriage, an absolute heresy and a schism.”

“Rome must speak,” he charged. “Now is the time to cry out the truth from the roofs [rooftops].”

“No bishop of Pope has authority to make a blessing to things or to behavior, which is against the will of our Creator and our Redeemer. We have to help these people in pastoral care to find their way, but the way of Jesus Christ and not according to the ideologies of this world.”