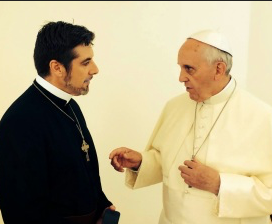 On a number of occasions, Cardinal Bergoglio advised non-Catholics not to convert to the Catholic faith, and told one evangelical friend that ‘we need to have bridge-builders.’

VATICAN CITY (LifeSiteNews) – In the nearly thirty years which have passed since his consecration as a bishop, Francis has established a long track record of belittling and even rejecting the need for conversion to Catholicism, dissuading Protestant friends from joining the Catholic Church.

Fr. Jorge Mario Bergoglio was consecrated auxiliary bishop of Buenos Aires in June 1992, meaning that from that moment on he was bound to be concerned with “the mandate of Christ to preach the Gospel to every creature” which “primarily and immediately concerns them [bishops].”

One of the chief duties of the Pope is to heed the command of Christ to teach the faith and bring converts to the Church: “Going therefore, teach ye all nations; baptizing them in the name of the Father, and of the Son, and of the Holy Ghost.” (Matt 28:19)

However, as bishop, cardinal, and eventually as Pontiff, the Argentine Jesuit displayed a consistent record of rejecting this duty, and instead discouraging converts from joining the Catholic Church.

‘The Church needs us as Anglicans’

Francis has a record of actively belittling the importance of conversion to Catholicism, as evidenced during his days as a cardinal in South America. U.K. Catholic journalist Damian Thompson recently recalled comments made by Cardinal Jorge Bergoglio to an Anglican prelate in South America.

Indeed, in 2009, Cardinal Bergoglio spoke with the Anglican Bishop of Argentina and former Primate of the Anglican Church of the Southern Cone, Bishop Gregory Venables, advising Venables against converting. The conversation was held with reference to Pope Benedict XVI’s formation of the Anglican Ordinariate, through which Anglican clergy could convert to Catholicism.

“He called me to have breakfast with him one morning and told me very clearly that the Ordinariate was quite unnecessary and that the Church needs us as Anglicans,” Venables told the Anglican Communion News Service in 2013, one day after Francis was announced Pope.

Venables, who described Francis as “a close and personal friend,” confirmed and elaborated his account of Bergoglio’s comments in a subsequent interview he gave to the BBC. Venables stated that his testimony of the conversation was true, although it “had not been meant for publication and had appeared on the Anglican Communion website without his consent.”

‘Bergoglio advised him against conversion for the sake of the mission’

In July 2014, Pentecostal prelate Bishop Tony Palmer died after being involved in a collision with a car. Palmer, like Venables, was a friend of Pope Francis, having met Bergoglio in 2008 in Buenos Aires, when he “sought the then-archbishop’s permission to work with charismatic Catholics in the city.”

Palmer, who married a lapsed Catholic from Italy, developed a deep friendship with Bergoglio in Argentina, coming to call the cardinal “Father Mario” and “my spiritual father.” Yet, as the Boston Globe reported, “when Palmer was tired of living on the frontier and wanted to become Catholic, Bergoglio advised him against conversion for the sake of the mission.”

Years later, Palmer notably recorded Pope Francis with his phone at a private meeting they had in the Vatican in early 2014 as the Pope gave a video message to over 3,000 evangelicals at the “Kenneth Copeland Ministries” meeting. In the video, Pope Francis said the pair had been “been friends for years.”

Then in June 2014, Palmer met with the Pope again, this time bringing with him a group of evangelical leaders to the Vatican, whose collective reach was reportedly over 700 million people.

That document, handed to Francis by Palmer, was worked on, before being signed and released by Lutherans and Catholics in 2017, on the eve of the anniversary of Martin Luther’s posting the 95 Theses, which sparked the Protestant revolt.

It was signed by the Evangelical Lutheran Church in America, the USCCB, and also presented to Cardinal Kurt Koch, president of the Pontifical Council for Promoting Christian Unity (PCPCU).

After Koch assessed the document, the PCPCU joined with the Lutheran World Foundation (LWF), and released an updated version of their 1999 joint document on justification to mark the 500th anniversary of Martin Luther’s excommunication from the Catholic Church.

Bergoglio ‘is famous for his meetings with Protestants’

However, such revelations did not come as a surprise to Argentine journalist Marcelo González, who wrote about Bergoglio’s record in Argentina upon the announcement of the new Pope in 2013.

He has not missed any occasion for holding acts in which he lent his Cathedral to Protestants, Muslims, Jews, and even to partisan groups in the name of an impossible and unnecessary inter-religious dialogue. He is famous for his meetings with Protestants in the Luna Park arena where, together with preacher of the Pontifical House, Raniero Cantalamessa, he was “blessed” by Protestant ministers, in a common act of worship in which he, in practice, accepted the validity of the “powers” of the TV-pastors.

Indeed, in 2015, Pope Francis continued his pre-papal tradition of pushing confusion on inter-religious aspects, when he told a Lutheran woman asking about receiving Communion with her Catholic husband to “go forward,” guided by individual conscience.

It’s simple. Liberal Catholics don’t expect Protestants to convert to Catholicism because they don’t think they need to. It is true that we recognize them [Protestants] as our “separated brethren” and acknowledge their faith and baptism, but we also acknowledge that they are separated. Not only that, when two lines begin to diverge as they continue (unless one of them changes their direction) they do not get closer: they become separated further.

Some months later, while visiting Georgia in October 2016, Francis declared that it is a “very grave sin against ecumenism” for Catholics to try to convert Orthodox Christians. Despite the Orthodox having split from the Catholic Church over 1,000 years ago – arguing that the bishop of Constantinople should be recognized as the supreme pontiff, as well as disagreeing about the nature of the Trinity – Francis said: “We should never proselytize the Orthodox! They are our brothers and sisters, disciples of Jesus Christ.”

He repeated this rejection of the Biblical call to convert nations only days later, when at a meeting with Lutheran pilgrims in the Vatican, he rebuked an 8-year-old girl for her question about converting her friends: “It is not licit that you convince them of your faith; proselytism is the strongest poison against the ecumenical path.”

Francis praised for revealing ‘more shared ground to be discovered’

This long-standing record of rejecting the Scriptural command to convert and baptize the nations has won Francis praise from non-Catholics. Writing in The Way in late 2020, Anglican minister Elizabeth Hoare lauded how “Francis’s attitude has come as a breath of fresh air, offering the possibility of more shared ground to be discovered.”

Pius XI: Catholics must reject ‘false opinion’ that ‘all religions’ are ‘praiseworthy

In contrast to Francis’ record of dissuading conversion, Pope Pius XI, in his 1928 encyclical Mortalium animos, wrote Catholics cannot accept “that false opinion which considers all religions to be more or less good and praiseworthy, since they all in different ways manifest and signify that sense which is inborn in us all, and by which we are led to God and to the obedient acknowledgment of His rule.”

“Not only are those who hold this opinion in error and deceived, but also in distorting the idea of true religion they reject it, and little by little turn aside to naturalism and atheism, as it is called; from which it clearly follows that one who supports those who hold these theories and attempt to realize them, is altogether abandoning the divinely revealed religion.”