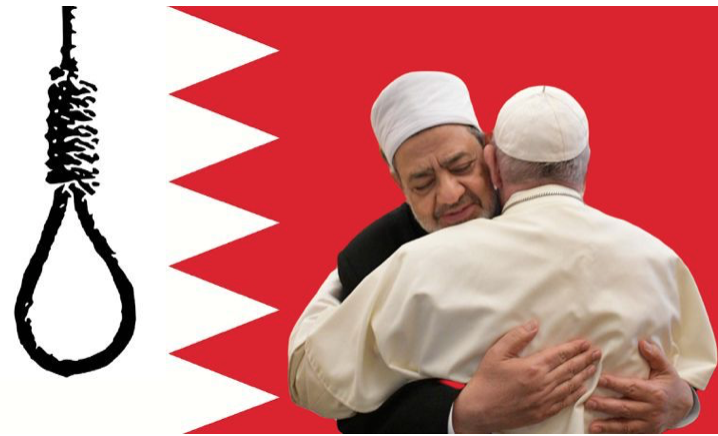 MANAMA, Bahrain (ChurchMilitant.com) - Pope Francis' silence on the death penalty in Muslim countries is causing the Vatican acute embarrassment after a report published Monday highlighted a 600% rise in the use of capital punishment in Bahrain.

Timed just a month before Francis visits Bahrain for interfaith dialogue with the grand imam of Al-Azhar, Ahmed al-Tayyeb, the 61-page report underscores the steep spike in executions since anti-government protests erupted in 2011 during the Arab Spring.

Francis, a fierce opponent of the death penalty, dedicated the September 2022 worldwide prayer intention of his papacy to ending capital punishment, urging "all people of goodwill to mobilize for the abolition of the death penalty throughout the world."

"Capital punishment offers no justice to victims, but rather encourages revenge. And it prevents any possibility of undoing a possible miscarriage of justice," the pontiff stressed, arguing that "the death penalty is morally inadmissible, for it destroys the most important gift we have received: life."

We should be aware that the concepts of human rights are full of ticking time bombs.GabTweet

Observers, however, note that the pope has failed to address the special case of capital punishment in the Muslim world, which is based on Islamic Shariah law and aimed specifically at apostates (Muslims who convert to Christianity or leave the faith).

"Pope Francis doesn't hesitate to change teachings of the Catholic faith that have been clear for centuries, but he doesn't dare say a thing about the death penalty when he travels to Islamic countries, where it is founded upon numerous passages of the Qur'an and Hadith,"

Spencer, author of 23 books on Islam and the Middle East, elaborated:

If he did say anything about it, he would be calling into question his earlier unsupported and unsupportable statement that Islam, properly understood, teaches peace. So he remains silent, showing once again that his much-vaunted "dialogue" with Muslim leaders doesn't lead to any reconsideration or reevaluation of anything on the Islamic side.

Spencer explained how the pope's silence was, in effect, endorsing "Islamic principles justifying the persecution of Christians."

Al-Tayyeb, who is named five times and upheld as the pontiff's inspiration in Fratelli Tutti, states that "the four schools of [Islamic] law all concur that apostasy is a crime, that an apostate should be asked to repent, and that if he does not, he should be killed."

"[Contemporary] jurisprudents concur — and so does ancient jurisprudence — that apostasy is a crime," al-Tayyeb asserts in a 2016 Arabic interview, translated into English by the Middle East Media Research Institute.

"We should be aware that the concepts of human rights are full of ticking time bombs," the grand imam warned, labeling apostasy "high treason" and "a rebellion both against religion and what is held sacrosanct by society."

Al-Tayyeb cites the "exception of the Hanafi School," which legislates "that a female apostate should not be killed." He explains the exception is "because it is inconceivable that a woman would rebel against her community."

Article 2(a) of the Cairo Declaration on Human Rights in Islam states that "it is prohibited to take away life except for a Sharia-prescribed reason," explaining that "all four Islamic schools of jurisprudence concur on the death penalty for apostates."

Speaking to Church Militant, British human rights campaigner Dr. Niall McCrae lamented how "the Vatican takes a relativist stance devoid of Christian values of forgiveness and the sanctity of life, sacrificing its principles at the altar of its obsession with interfaith relations."

A more courageous and principled pontiff would raise the topic at every opportunity in the Muslim world. GabTweet

Imagine public beheadings were a weekly feature in the piazzas of Rome and Turin. This is the reality on the Arabian peninsula, most notoriously at "chop-chop" square in Riyadh. Francis denounces capital punishment, but selectively. A more courageous and principled pontiff would raise the topic at every opportunity in the Muslim world.

In 2018, Francis issued a controversial rescript changing the Catechism of the Catholic Church on the death penalty, calling capital punishment "an attack on the inviolability and dignity of the person" and deeming it "inadmissible" in "the light of the gospel" in all cases.

"Pope Francis has once again appeared to contradict two millennia of clear and consistent scriptural and Catholic teaching," Catholic theologian Edward Feser wrote in an essay for First Things.

Feser noted that "the Church has always taught, clearly and consistently, that the death penalty is in principle consistent with both natural law and the Gospel." He also noted that we find this upheld in Scripture, in the Church Fathers and "by the popes up to and including Pope Benedict XVI."

Church Militant contacted the Holy See Press Office asking if Pope Francis is likely to address the issue of the death penalty for apostasy in the Islamic world during his visit to Bahrain but received no response as of press time.