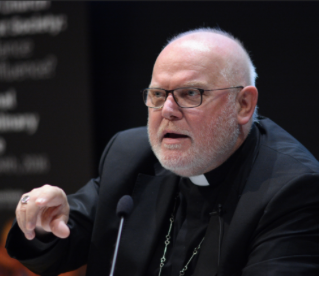 Joker Cardinal: "Jesus Didn't Want to Proclaim a Doctrine of God, a Doctrine"

Munich Cardinal Reinhard Marx has warned against talking "too much" about God (Herder.de, October 2022).

He attributes the "crisis of the Church" to the fact that the Church "has claimed and claims to know quite a lot about God and to be able to authoritatively communicate his will to all people." However, when the Church was transmitting its knowledge of God, it was not in crisis, which only began when the Council Church lost the Faith.

Some concepts of evangelisation strike Marx "as if one imagines the sender with the truth on one side and the receiver on the other, from whom approval is expected." This must have been an allusion to his own covid dogmatism.

Marx tries to convince himself that Christ "did not want to proclaim a doctrine of God", "not a doctrine", but he wanted - another platitude - "to make clear by his examples and parables of the kingdom of God what the presence of God in our midst means now." Marx obviously does not know the Gospel of John.

The only dogma that Marx and his clown bishops enforce with the threat of excommunication is the compulsion to pay them the church tax.