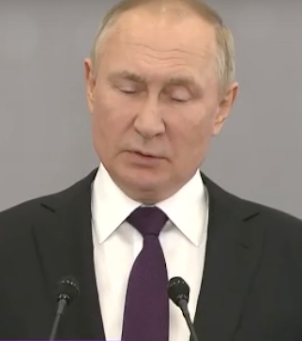 The Russian president noted that Moscow is not pursuing the goal of "destroying Ukraine."

Russian President Vladimir Putin believes that the deployment of troops from NATO countries in a hypothetical direct confrontation with the Russian army would lead to "a global catastrophe," he said Friday at a press conference at the end of the summit of the Commonwealth of Independent States (CIS) and the forum between the countries of Central Asia and Russia.

"In any case, putting any troops in direct contact, in direct confrontation, with the Russian Army, is a very dangerous step that could provoke a global catastrophe. I hope that those who talk about this will be smart enough not to take such dangerous steps," Putin said when asked about a hypothetical deployment of Atlantic Alliance military in Ukraine.

In his assessment of the development of the Russian military operation in Ukraine, the head of state stressed that Russia is doing "the right thing", otherwise the situation could turn against the country and "in worse conditions". "What is happening today is unpleasant, to put it mildly. But we would get the same thing later, only in worse conditions for us. That's all. So we are doing the right thing and on time," he said.

In parallel, Putin assured that at the moment there is "no need" to continue launching massive missile strikes against military and critical infrastructure targets in Ukraine. "Now other tasks are raised, because 7 out of 29 targets were not hit as planned by the Defense Ministry. [...] At least for now there is no need to carry out massive strikes, but we will see," he noted. In this regard, he stressed that Moscow does not pursue the goal of "destroying Ukraine."

On the other hand, the president reiterated that Moscow has always been ready for dialogue with Kiev and that it was the Ukrainian authorities who decided to dismantle the process after the negotiations held in March in the Turkish city of Istanbul.

"We always said that we are ready. Even in Istanbul we reached certain agreements which, in fact, were almost initialed" he remarked. However, after the withdrawal of Russian troops from Kiev, the Ukrainian authorities "immediately lost their willingness to talk. But if they were ready, let's go! In that case, probably, mediation efforts of all interested parties will be necessary," he stressed.

In this line, he recalled that Ukrainian President Vladimir Zelensky ratified the decision of the National Security and Defense Council of Ukraine prohibiting negotiations with Russia as long as Putin is the head of state.

A wheat cargo ship with explosives?

The president also warned that Moscow will close the humanitarian corridor for the evacuation of Ukrainian grain if it is confirmed that the device used in the explosion against the Crimean bridge, described by Moscow as an attack perpetrated by Kiev, was carried from the port of Odessa on a cargo ship.

"The [Russian] Federal Security Service established that this alleged cargo, or rather the explosives [used in the Crimean bridge bombing], were most likely shipped by sea from Odessa. But it has not been established with certainty whether they did it on ships with grain or not. That is the question. There is still no answer," he noted.

Possible meeting with Biden at the G20?

As for his participation in the summit of the G20 countries, scheduled for November in Indonesia, Putin stressed that this issue has not yet been finally resolved, although he confirmed that the Russian side will be represented at the forum.

In this context, he noted that he currently does not consider it necessary to meet with his U.S. counterpart, Joe Biden. "You have to ask him whether he is ready to hold such negotiations with me or not. Frankly, I don't see such a need in general," he estimated.

Putin added that, for the time being, there are no consultations on arranging direct negotiations with leaders of other G20 nations, although he stressed that he is "in permanent contact" with some, such as Turkish President Recep Tayyip Erdogan.