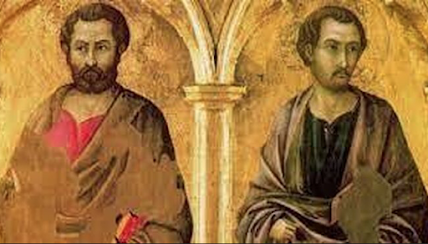 The Lord, who had no need for anyone to bear witness to Him, wanted, however, to choose the Apostles to be companions in His life and continuators of His work after His death. In the earliest expressions of Christian art we often find Jesus surrounded by the Twelve, forming with Him an inseparable family. These disciples were not of the influential class of Israel nor of the priestly group of Jerusalem. They were not philosophers, but simple people. "It is an eternal marvel to see how these men spread throughout the world a message radically opposed in its essential lines to the thinking of the men of their time, and, unfortunately, also to that of our own!

The Gospel frequently manifests the pain of Jesus for the lack of understanding of those to whom he confided his most intimate thoughts: Are you still without knowledge and intelligence? Is your heart still blinded? Do you have eyes and do not see? Do you have ears and do not hear? "They were not cultured, not even very intelligent, at least as far as supernatural realities were concerned. Even the simplest examples and comparisons were incomprehensible to them, and they turned to the Master: Domine, edissere nobis parabolam (Mt 13:36), Lord, explain the parable to us. When Jesus, with an image, alludes to the leaven of the Pharisees, they understand that he is reproaching them for not having bought bread (cf. Mt 16:67) (...). These were the Disciples chosen by the Lord; this is how Christ chose them; this is how they appeared before, filled with the Holy Spirit, they became pillars of the Church (cf. Gal 2:9). They are ordinary men, with defects, with weaknesses, with words longer than works. And yet Jesus calls them to become fishers of men (Mt 4:19), co-redeemers, stewards of God's grace".

The Apostles chosen by the Lord were very different from one another; nevertheless, they all manifest one faith, one message.... They are the "envelope," whose only mission is to transmit the paper on which the message is written, in an image once used by St. Josemaría Escrivá to speak of humility; they only wish to be instruments before the Lord: the important thing is the message, not the envelope.

Of the two great Apostles, Simon and Judas Thaddeus, whose feast we celebrate today, we have only received a few pieces of news: of Simon we only know with certainty that he was expressly chosen by the Lord to be one of the Twelve; of Judas Thaddeus we also know that he was a relative of the Lord, that he asked Jesus a question at the Last Supper: "Lord, what has happened that you are going to manifest yourself to us and not to the world?5 and that, according to ecclesiastical tradition, he is the author of one of the Catholic Epistles. We do not know where their bodies were buried and we do not know well the lands they evangelized. They were not concerned with carrying out a task in which their personal gifts, their apostolic conquests, the sufferings they endured for the Master would stand out. On the contrary, they tried to remain hidden and to make Christ known. In this they found the fullness and meaning of their lives. And, in spite of their human conditions, which were inadequate for the mission for which they were chosen, they became the joy of God in the world.

We can learn to find happiness in quietly fulfilling the work and mission that the Lord has entrusted to us in life. "I advise you not to seek your own praise, not even that which you would deserve: it is better to remain hidden, and that the most beautiful and noble of our activity, of our life, remain hidden.... How great it is to make oneself small: "Deo omnis gloria, all glory to God".

In this way we will be truly effective, because "when we work solely and exclusively for the glory of God, everything is done naturally, simply, as one who is in a hurry and cannot stop at "greater manifestations", so as not to lose that unrepeatable and incomparable relationship with the Lord". "As one who is in a hurry", so we must pass from one work to another, without dwelling too much on personal considerations.