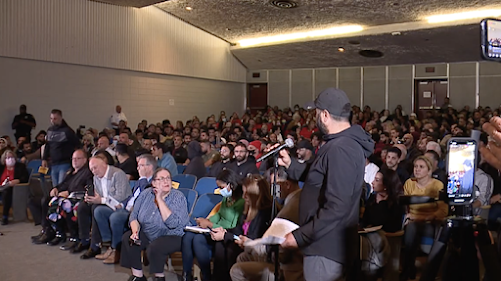 Parents in Dearborn, Michigan once again expressed mass opposition Thursday to sexualisation of their children in school via controversial ‘LGBTQ+’ books.

The meeting was reconvened Thursday, and hundreds turned up again to make their voices heard.

Many of the parents in attendance were Arab American and Muslim, with Christian conservative parents joining them in protest.

Referring to books such as “This Book is Gay” and “All Boys Aren’t Blue,” Parent Ziad Abdalmalik commented, “A normal, psychologically sound and stable mind would come to a conclusion that that specific material is nothing but sexually explicit.”

Last week we highlighted how CBS Evening News ran a report lamenting the fact that the books in question have been removed from a school library in Jamestown, Michigan after parents complained that the material was pornographic.

The piece framed the development, which is occurring in schools nationwide, in the context of a “sharp rise in book bans in America’s schools and libraries”.

As we have repeatedly pointed out, the so called children’s books contain graphic depictions of oral sex between gay men, as well as a host of other material that is objectively unsuitable for kids.

This case is one of many where parents have spoken out against books and subject matter, including transgenderism, pedophilia, gay pornography, and critical race theory, that children as young as Kindergarten age are being subjected to in America’s schools.

Parents nation-wide have found themselves under attack by leftists and even government entities over recent months after taking on school officials.