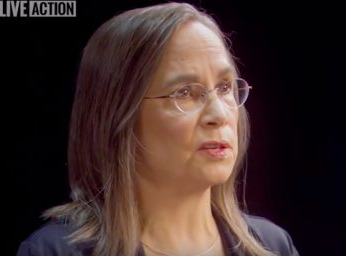 What changed me from being an abortion provider to a pro-life advocate? Was it people carrying around disturbing photos of babies killed by abortion? Was it being called names and having my life threatened? Was it the hate-filled words yelled at me? No.

The more others tried to stop me, the more determined I was to continue performing abortions. But God used these experiences to empty me of myself so He could fill me with His Spirit. He even appointed a nun to pray for me in secret. That nun was Sister Josita Schwab.

While I was working at Planned Parenthood, Sister Josita read a newspaper article in which I stated that it was not my wish to perform abortions full time. My words gave her hope that my heart was open to change.

If this Dr. Patti is sitting on the fence, Sister Josita thought, let’s see if God can push her over.

And so this nun began to diligently pray for me by name. For 10 years, Sister Josita prayed for me. Then one day, a decade later, she watched TV coverage about the need for stricter pro-life laws in South Dakota, and she saw a female physician speak for the right-to-life movement.

When my name was mentioned, Sister Josita began to cry. God had heard her prayers. I know this because she sent me a letter later that year. I felt the same astonishment, joy and humility in response to her prayers being answered.

During my lengthy conversion from abortion provider to pro-life spokeswoman, I had to investigate the hard questions and thoughtfully consider various opinions about protecting life, along with the consequences of what I had done. As I listened, the Holy Spirit’s voice grew louder, and I reached out to its source. Only then was I changed.

After a lifetime of mistakes and deliverance from them, I can say forthrightly and without a doubt that no one is beyond redemption. No matter what you’ve done or failed to do, all is not lost. Our divine Redeemer loves you, and if you choose to trust Him with your life, He will make “all things work together for good” (Romans 8:28).