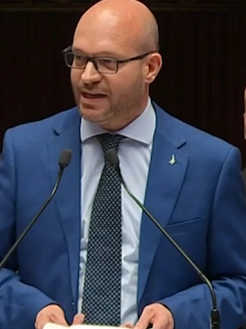 Lorenzo Fontana, 41, who is hated by the leftwing oligarchs, was elected on October 14 the speaker (president) of the Chamber of Deputies, the lower house of the Italian Parliament.

This is the third highest-ranking office of the Italian Republic. Doubtlessly as a joke, he dedicated his "first salute to Francis who represents the spiritual reference for the majority of Italians and the highest moral values in the world” and received applause

Asked, if he likes Francis, Fontana replied in 2018, “Let’s say that I prefer Cardinal Burke.”

Unlike Francis, the outspoken Fontana opposes abortion, homosexualism, euthanasia and gender ideology. He has supported a procession against a 2019 homosex march and freedom of speech against thought police.

He then quoted more serious people like Thomas Aquinas ("Evil is not the opposite of good, it is the deprivation of good") and Blessed Carlo Acutis ("Everyone is born an original, but many die a photocopy").

He “tries” to be Catholic, what is “not easy,” and attends Holy Mass in Rome with the Fraternity of St Peter.