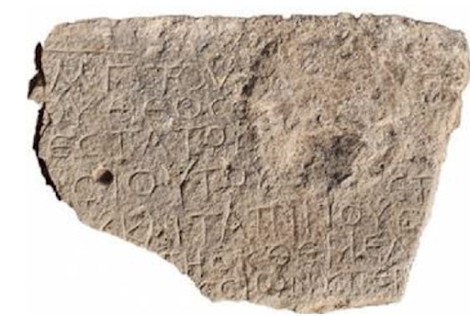 The 5th century stone found in Upper Galilee with the inscription of the names of Christ and Mary.

(Jerusalem) In Al-Taiyiba (Taibe), in the Valley of Jezreel in Upper Galilee (Northern Israel), a stone was found with the inscription in Greek: "Christ born of Mary". It was originally part of the lintel of a 5th century Byzantine church.

The church was under the jurisdiction of the bishop of Bet Shean, which in ancient times was called Scythopolis and so appears in two books of the Old Testament. Scythopolis, which had a Hellenistic influence, was the capital of the Roman province of Palaestina Secunda in the 5th century. Al-Taiyiba was part of this diocese. In the 5th century, from which the discovered inscription comes, Severianos was also bishop of Scythopolis, who defended the decisions of the Council of Chalcedon of 451, that Christ is true God and true man, against Monophysists and Nestorians, and suffered martyrdom because of it.

"This work of the godly and pious bishop [Theodo]sius and the unworthy Th[omas] was built from the ground up. Whoever enters it should pray for them."

The excavations are led by archaeologists Tzachi Lang and Kojan Haku. The inscription was deciphered by Professor Leah Di Segni of the Hebrew University of Jerusalem.

The stone was found in a place where it had been reused and inserted into one of the walls of a magnificent building from the late Byzantine period. During the excavation of the building, the inscription was discovered, which reflects a greeting to visitors, which is why, the researchers concluded, it was a dedication to a church and not to a monastery.