The hypocrisy of the Pharisees 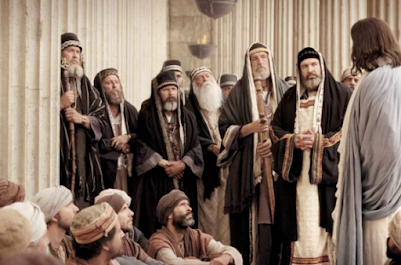 Such a crowd gathered to see Jesus that they ran over one another. And among the many who surrounded him, the Master first addressed his disciples with this warning: Beware of the leaven of the Pharisees, which is hypocrisy. And he added: There is nothing hidden that will not be discovered, nor secret that will not become known. For what you have said in the dark shall be heard in the light; what you have spoken in the ear under this roof shall be proclaimed upon the housetops.

In the ancient Greek world, the word hypocrite designated the actor who, with a mask and a disguise, assumed an alien personality. He pretended to the public to be someone else, often far removed from his own reality: sometimes he was a king and sometimes a beggar or a general. It was enough for him to hide his own being behind the mask and take on false qualities and feelings. His role was developed facing the public, having as the supreme rule of his performance the approval and applause of the gallery.

The intimate being - the leaven - of many Pharisees was hypocrisy, acting in the face of others and not in the face of God. Their life was as false as that of the actors during the performance. They fell into the temptation of giving great importance to the judgment of men - so weak and passing - and neglecting that of God. The Lord will tell them on another occasion that they are like whited sepulchers: outwardly they appear beautiful, but inside they are full of rotting bones. In reality, they led a double life: one full of masks, of appearances, of falsehood, which was attentive to the concept that men had of them; the other, careless and ungenerous, facing God.

The Lord wants for his own a leaven, a very different way of being. He wants us to have before Him and before others a single life, without masks, without disguises, without lies. Men and women of one piece, who go with the truth before them.