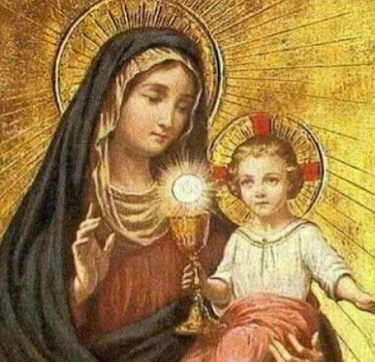 A young nobleman named Eskil was sent by his father to study in Hildeseim, a city in Lower Saxony; but he indulged in a licentious and broken life. Falling seriously ill, within a few days he was at death's door.

Seeing himself at the end of life he had a vision: he saw himself in a fiery furnace; he thought he was in hell, but unthinkingly he was able to get out of it and found himself in a palace; on entering a large hall he saw the Blessed Virgin who said to him: "How did you have the courage to present yourself in my presence? Get out of here and go to the fire of hell that you have well deserved". The young man implored Our Lady's mercy, and turned to some people who were in the room and begged them to unite their prayers to his. They did so, but the Blessed Virgin said to them, "Are you ignorant of the licentious life he has led without even deigning to say a Hail Mary?"

The lawyers said to him, "Madam, he will change his life." To which the young man added: "I promise to make true amends and I will be your faithful and loyal servant". The Virgin then mitigated her severity, and answered him: "All right, I accept your promise, be faithful to me, receive my blessing, so that you may be free from dying in sin and from hell". Having said this, the vision disappeared. When Eskil returned from his vision, he told the others about the grace he had received from Mary.

From then on he began to lead a holy life, always nourishing in his heart a great and tender love for Mary. Later he was appointed archbishop of Luna, in Denmark, where he converted many unbelievers. When he was older, he renounced the miter and became a monk of Clairvaux where he lived for four more years, after which he died with the death of the just. Some authors count him among the saints of the Cistercians.