Two conversions by a prayer-card 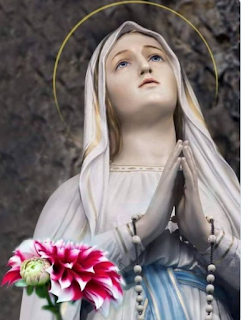 Two conversions brought about by the image of the Immaculate Conception

In one of the residences of our humble Congregation in this kingdom, a woman came to tell one of our fathers that her husband had not gone to confession for many years, and that the poor woman did not know what to do to convince him, because when he spoke to her about confession, he beat her. The father told her to give him an image of Mary Immaculate. When evening came, the woman again begged her husband to go to confession, and as he did not listen to her, she gave him the picture of the Virgin. As soon as he received it, he said to her: "Well, when do you want me to go to confession? I am coming soon. The woman began to weep with joy at seeing such a sudden change. In the morning she went with her husband to our church. When the priest asked her how long it had been since her last confession, she answered that it had been twenty years. "And what made you come to confession?" the priest asked her. "I was obstinate," he replied, "but yesterday my wife gave me a prayer-card of Our Lady, and immediately my heart was changed, so much so that every moment seemed like a thousand years waiting for the day to come so that I could come to confession. He went to confession with great sorrow, changed his life and continued for a long time going to confession to the same priest.

In another place in the diocese of Salerno, while we were giving the holy mission, there was a man who was very much at enmity with another who had offended him. One of our fathers spoke to him about the forgiveness of offenses, but he answered: "Father, have you seen me in the mission? No; and it is because of this. I understand that I am condemned, but there is no remedy, I have to take revenge". The priest tried hard to convert him, but seeing that he was wasting his time, he said to him, "Receive me this prayer-card of Our Lady." "And what do I want this prayer-card for?" he replied; nevertheless, he accepted it. And at once, forgetting his grudges, he gladly agreed to what the father asked of him. "Father, do you want me to forgive my enemy? I am ready to do so. And the reconciliation was postponed for the following morning. But when the morning came, he had changed his mind and did not even want to hear about reconciliation. His father offered him another prayer-card of Our Lady. She did not want to receive it for nothing. Finally, reluctantly, he received it. And as soon as he had it in his hand he said, "It is finished, where is the notary?"

He made his reconciliation and went to confession.